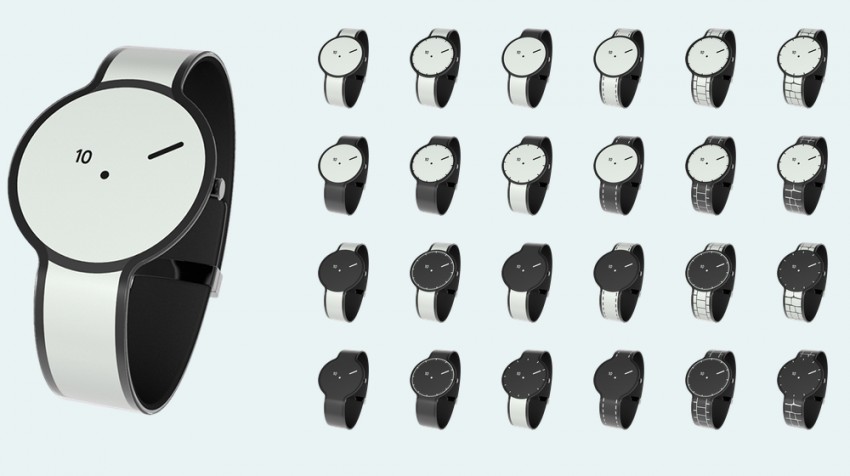 We’re awash in new devices. It seems on a regular basis that a new smartphone, tablet, or wearable device is hitting the market. Watches can now do more than tell time. They can make and receive calls, browse the web, and receive email and social media notifications. But an upcoming entry from Sony may be the most interesting yet.

The FES Watch isn’t even a smartwatch. There are no internal electronics. In fact, it’s made mostly of paper … electronic paper, that is.

FES Watch has a simple black and white color scheme and a minimalist display. But the watch’s main feature is its ability to change designs based on the gestures of the person wearing it.

This brief video gives a glimpse of the device’s display and changing surface design:

There are 24 different designs loaded onto the FES Watch.

FES Watch is a single piece of e-Paper, according to the maker’s homepage. There is one button on the side of the watch face that allows users to change the design being displayed, based on a review of the watch provided by The Verge.

In September, Sony launched a crowdfunding campaign for the watch on a site called Makuake under the name Fashion Entertainments, the Wall Street Journal reports.

But media reports soon made it clear who was behind the new device.

In any case, the crowdfunding effort proved an overwhelming success raising 2 million yen (or $17,000 in U.S. dollars) in only three weeks.

The company apparently decided to launch the watch campaign under an assumed name to test the demand for the product in the marketplace independent of the association with Sony’s powerful brand.

This may be the first example, however, of a major corporation venturing into crowdfunding for new project development.

Sony is not stopping with its e-paper watch. There’s also talk of a bow tie in the works that would also be made entirely of e-paper.

The effort is apparently being spearheaded by five engineers within the company working with an outside design firm.  The project also seems to be an example of a new effort to foster entrepreneurial spirit within the company.

Under an initiative of Sony Chief Executive Kazuo Hirai, the electronics company is encouraging its employees to come up with new product or business ideas by providing financial and advisory support.

There is no timetable available for the release of the FES Watch but early supporters of its crowdfunding campaign could expect to get theirs in May 2015.