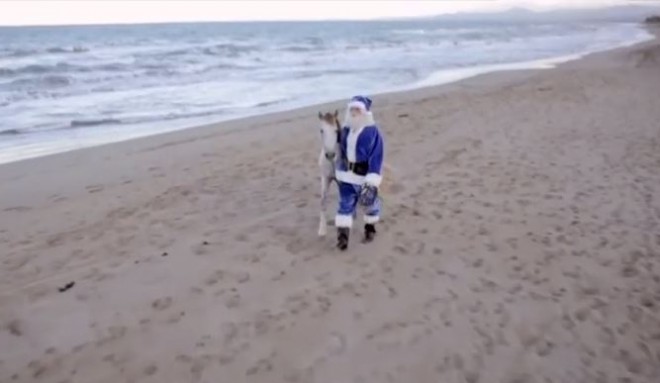 WestJet is in the Christmas spirit once again.

Last year the airline fulfilled the Christmas wishes of passengers on two of its flights, handing out everything from scarves to flat screen TVs. This year, the company brought the holiday spirit to Nuevo Renacer, an impoverished community in the Dominican Republic. The event came complete with Santa, tree, snow … and, of course, gifts for young and old.

And once again, WestJet created a video to tell the story:

One day a mysterious blue sleigh appeared on a street of town near the beach.

Children where surprised to be met with a Spanish speaking Santa on a video screen, ready to make their Christmas wishes come true.

And residents young and old took turns speaking with WestJet’s Blue Santa and sharing their needs and desires.

This year’s first video, which has already received nearly three million views on YouTube, offers a glimpse into the daily lives and struggles of those living in Nuevo Renacer.

Yes, children asked for skateboards and dolls. But just as many people asked for necessities like a blender, a washing machine or a baby’s crib to make life easier.

The following day, volunteers from WestJet descended on the community to deliver the requested gifts, most in plastic storage containers to guard against the sometimes damp climate. WestJet’s Blue Santa arrived last leading the horse the carriage driver had requested.

The entire town then participated in what was for the children their first snowball fight.

Volunteers had one more surprise to reveal the following day: a new playground for children at the local school.

The kind of project to select for this year’s WestJet Christmas Miracle was a no-brainer.  Manager of Sponsorship, Community Investment and Experiential Marketing Coery Evans discussed that decision further in this followup video:

Evans says the company has been involved in the community since 2012 partnering with Live Different, a Canadian non-profit education organization.

He says the company is now committed to the long-term ongoing development of the community. And he adds that WestJet customers could not be clearer about their support of the company’s Christmas Miracle videos:

“We received so many emails, letters, Tweets and Facebook posts from people who really enjoy the stories that we’re telling … and if our guests feel like its something they would like to see again next year, we’ll certainly put our heads together and see what we come up with.”

Your businesses may not have the resources of an airline, but that doesn’t mean you can’t make a difference — during the holiday season and all year around.

Do some brainstorming about how you can make a positive change. Your customers and community will thank you for it.