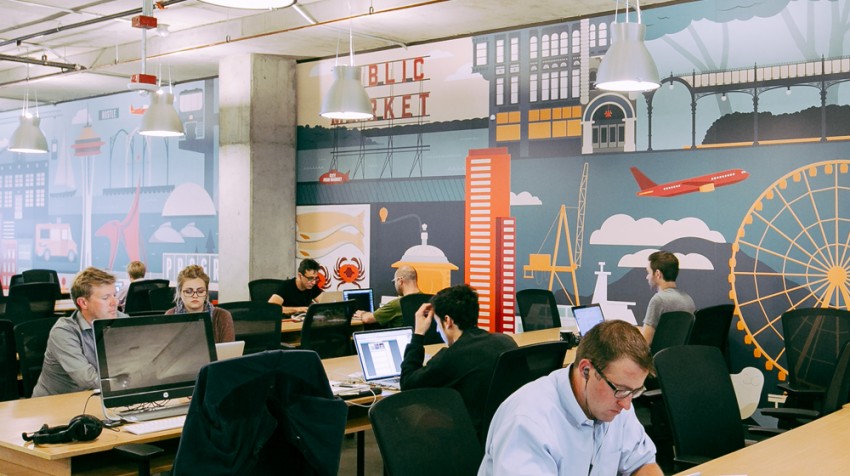 A startup that leases office space to other startups is now worth an estimated $5 billion.

But the long-term fate of WeWork is debatable, even after it just raised another $355 million in funding, according to a Wired report.

WeWork is essentially a hub where startups have access to office and work spaces that are technologically ready to meet their needs. The target is the startup business that’s ready to leave the home office, garage, or basement, and expand.

WeWork offers visually appealing professional office spaces at a variety of locations. Right now, there are 11 WeWork hubs in several countries, but mostly in the U.S.

WeWork members can lease either common areas for $45 a month, a lab for $450 a month, or an office at $550 a month. The prices of the lab and office leases vary by location, according to the WeWork website.

In common areas, startup owners work elbow-to-elbow with other professionals in an environment that invites social interaction and networking. The labs at WeWork sites are designed as “open-source” work spaces providing technical help around the clock for startups within the WeWork community.

Office spaces are private, fully-enclosed areas where a startup can begin to establish a physical identity. But they are designed for companies of any size.

In addition to physical office spaces for startups, WeWork also hosts its own social network where members can interact with each other.

In an interview with the Wall Street Journal, WeWork co-founder Adam Neumann compared his company’s approach to that of Uber, the ride-sharing company, and AirBnB, the house and apartment-sharing company.

But those companies only facilitate a market in which others can offer a place to stay or a ride to and from work. WeWork is buying its own office space, making upgrades and then leasing.

That essentially means that WeWork’s growth may be limited, wrote Issie Lapowsky of Wired. For example, people are likely to always be in need of an affordable ride to or from somewhere in Uber’s case. And they will always need a temporary place to stay in the case of AirBnB.

But there may not always be a market for high-end office space among high tech startups. And companies like WeWork have invested a great deal of money in physical real estate betting that there will.  So it remains to be seen how WeWork will do long term.