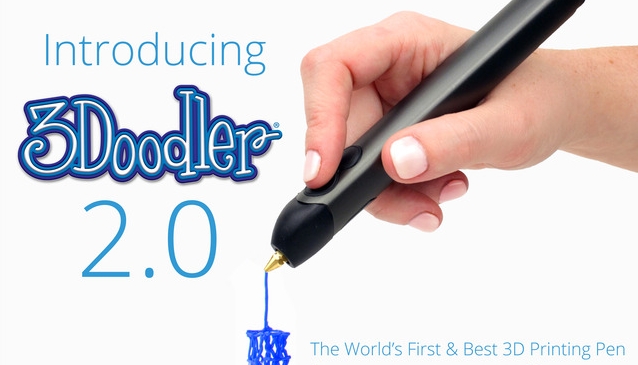 Those coming across the latest Kickstarter campaign for the 3Doodler 2.0 3D pen may find something familiar about the product. The original 3D pen from developer WobbleWorks is already available in many retail stores. So why is this particular 3D pen back again for another crowdfunding round — and why does the campaign appear so successful?

The answer is that this is not quite the same pen as the original WobbleWorks brought to the market several years ago. It is a new and improved version, the company says.

Here’s an overview of the latest Kickstarter campaign in the video below:

In 2013, WobbleWorks launched a successful Kickstarter campaign resulting in the original 3Doodler. This gadget allows you to literally draw in the air with the use of fast hardening plastic. The idea comes from 3D printers but doesn’t require computers, software or any special know-how. The company’s goal was to take 3D printing technology and make it affordable and usable for the everyday person.

The result may not be much like an actual 3D printer, but it does look like fun. The device is definitely for those who already have some artistic ability, but clearly there are some who love it regardless.

The company’s original campaign amassed over $2,000,000 in pledges. This was far over the original $30,000 goal. Not only that, but WobbleWorks used this campaign to create its own fanbase community, working with independent artists to display the potential of the product.

The new Kickstarter campaign is launching the 3Doodler 2.0. A slimmer version of the original, it also boasts being lighter and easier to use. There are other upgrades WobbleWorks claims are being added to the design, based on user recommendations and feedback from the original 3Doodler.

Kickstarter certainly seems to be working for them a second time. With more than a week left to go, the campaign has raised almost $800,000 in pledges, more than meeting its original goal. Thanks to the huge success of the first campaign, the second is probably unnecessary. But the company says on its Kickstarter page that the goal was to bring it back to where it all started:

“It was thanks to the Kickstarter community that we were able to make the 3Doodler dream a reality. . .To say a big thank you for all of your help and inspiration, we decided to come back to the place where is all began and bring 3Doodler 2.0 to you first!”