Small Business Loans Up at Big Banks, Down at Small Ones 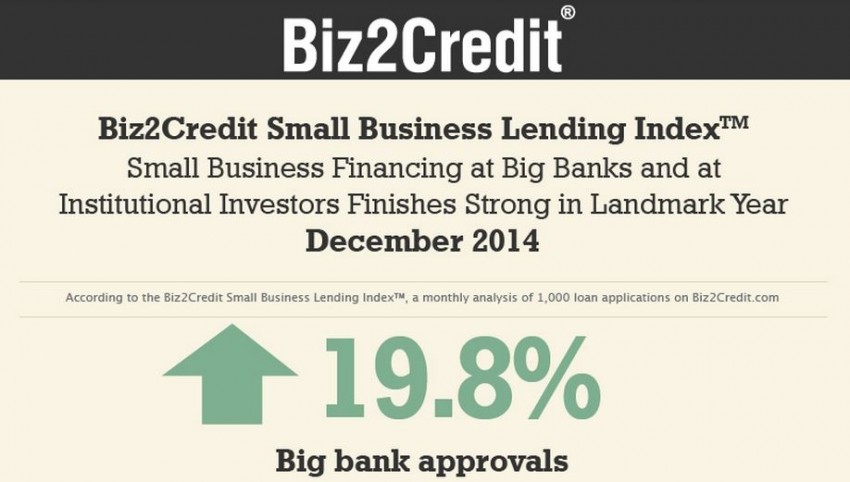 If you look at the index for the final month of 2014 one way, you’d see approval of small business loans at big banks continues to increase.

According to Biz2Credit, big banks approved 21.1 percent of the loan requests they received from small businesses last month. That’s up from 20.8 percent in November.

That’s the second straight month of increase since October, and part of a steadily upward trend for most of the year. In fact, October saw the first rate drop for small business loan approval at big banks in seven months.

And compared with 2013, at the same time, small business loans are being approved 20 percent more often by big banks.

So 2014, on the whole, seems to have been a good year for small businesses seeking capital from banks to grow.

But if you look at the numbers another way, you’d see that this increase is only telling part of the story. It’s a story of success mainly for small businesses seeking big money from big banks.

In a statement accompanying the release of the December 2014 index, Biz2Credit CEO Rohit Arora explains:

“The higher percentage of loan approvals at big banks is good news for small business owners. However, big banks typically seek to grant loans of $500,000 or more and often prefer loans in excess of $2 million.”

And small banks aren’t likely to be a good alternative. There lending trends have continued to be negative, the Biz2Credit Index notes.

That’s down from the 49.8 loan approval rate by small banks in November and marks the seventh straight month of decline. Though the approval rate is still a percentage point higher than it was in December 2013.

Still, other options continue to present themselves for small business owners.

For example, institutional lenders, a new category for the index, saw a 60.1 percent approval rate for small business loans in December.

That’s up from 59.9 percent in the previous month. The category has seen a steady increase since Biz2Credit started monitoring in January 2014.

“Institutional lenders continue to be prominent factors in the small business finance game. They are offering a wider variety of financial products that are more attractive to borrowers, including longer terms and lower interest rates than other non-bank alternative lenders.”

By contrast, other lenders have not fared as well.

Approval rates for these lenders hit 61.8 percent in December, the twelfth straight month of decline.

“Small business owners’ financials have improved. Their performance is better and they are increasing their business credit scores. As a result they are not as desperate for money as they were during the recession when many alternative lenders could charge very high interest rates.”

Credit unions also saw a drop in December, approving 43.3 percent of small business loan applications down from 43.4 percent in December.

Biz2Credit creates its monthly index by analyzing data from more than 1000 small business owners who applied for loans between $25,000 and $3 million on its online lending platform.