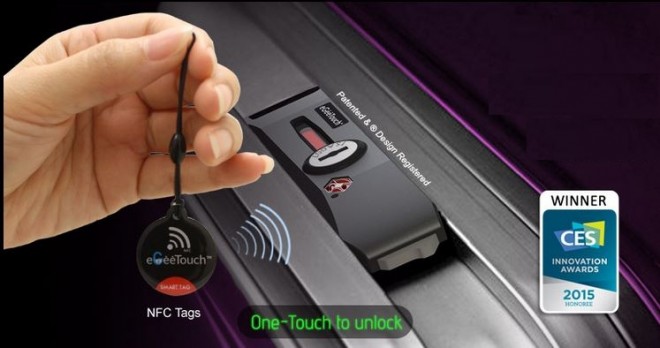 Startup company Digipas has unveiled its new smart luggage lock at CES 2015. The company says the  eGeeTouch Smart Luggage Lock secures luggage without the use of keys or combination codes. Instead, the lock allows proximity access via Near Field Communication enabled smartphones and tablets or through RFID. Digipas claims the device will unlock instantly with a tap of your smartphone.

eGeeTouch is battery operated with an expected battery life of three years. However, if needed it can be charged through an external USB mobile power source. If you don’t have an NFC enabled device, Digipas says the eGeeTouch can be accessed with a pre-paired NFC smart-tag or sticker. There is also a backup key in case the battery runs out or you are unable to unlock it by any other means.

The company says the eGeeTouch also complies with Transportation Security Administration (TSA) requirements. It has a built in key lock so authorized TSA personnel can gain access if needed.

Availability and pricing has not been announced.