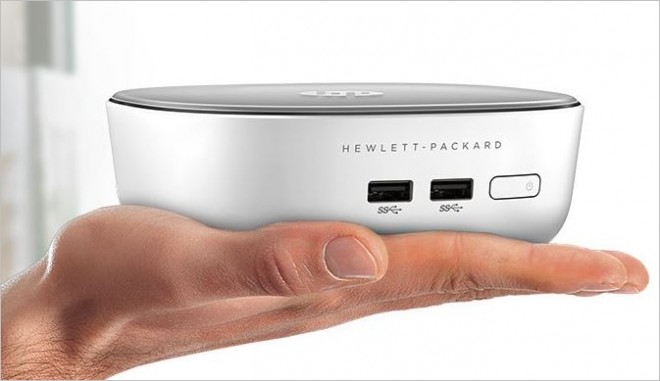 What you know about the traditional desktop computer, at least on the surface — forget it. HP’s latest entries on the market aim to change what a desktop computer looks like. The company recently introduced the HP Pavilion Mini Desktop and the HP Stream Mini Desktop.

Both take the idea of a desktop tower and shrink it down into a mini desktop that’s small enough to fit in the palm of your hand.

“The desktop tower PC continues to be a focal point in the home for sharing, creating, and entertaining. The HP Pavilion and HP Stream Mini Desktops deliver the benefits of a traditional desktop PC in a package that looks good sitting on a desk and is small enough to fit into an entertainment center.”

First, the HP Pavilion Mini Desktop is just a little more than 2 inches tall and it weighs just 1.6 pounds. HP says that the desktop comes stocked running Windows 8.1 and supports a processor up to the Intel Core i3. It’s also available with up to 1TB of storage, so despite its diminutive size, it still is a powerful little computer.

The HP Pavilion Mini also supports the use of two monitors. And those monitors could include a television. The computer supports quad-HD quality pictures, too.

And with that small size also comes a considerably smaller drain on your electricity usage. The HP Pavilion Mini uses just 45 watts of electricity. It’s actually Energy Star certified. HP says that a traditional tower PC can use up to 250 watts to run.

There are some drawbacks as far as things you might find on a more traditional tower but that simply won’t fit on the HP Pavilion Mini. There will be no optical drive for DVDs and CDs. The computer is Bluetooth-enabled, however, so it can be connected to any other such device in your home.

HP says the Pavilion Mini Desktop will be ready for sale on its website starting Jan. 14. It will be available at some retailers on Feb. 8.

The computer comes with a keyboard and mouse. The monitor is not included. It will start at $319.99. That’s stocked with the Intel Pentium 3558U processor, 4GB of RAM, and a 500GB hard disk drive.

The other device, the Stream Mini Desktop, starts at a lower price point, just $179.99. That computer is stocked with the Intel Celeron 2957U processor, 2GB of RAM, and 32GB SSD of storage.

It, too, will be available first on the HP website soon and in some stores starting on Feb. 8 A webpage lets interested customers inquire for further information.