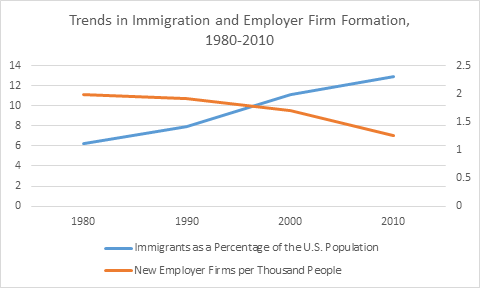 The rate at which Americans create new companies has fallen by nearly half over the past thirty-five years — from 2.56 new businesses with employees per thousand people in 1977 to 1.31 in 2012 — data recently released by the Census Bureau reveals. That alarming trend has policy makers scurrying to identify the causes of the decline, and to reverse it.

Some policy researchers affiliated with the Ewing Marion Kauffman Foundation, a non-profit organization devoted to the study of entrepreneurship, have proposed immigration reform as the answer. Dane Stangler, the Foundation’s Vice President of Research and Policy, has claimed (PDF) that the country needs to bring in more foreign-born entrepreneurs to combat the decline in the nation’s start-up rate. Jonathan Ortmans, a Senior Fellow at the Foundation, told the Washington Post that “immigration reforms represent one of the most powerful possible moves lawmakers could take to spur new business formation.”

While immigration reform might be desirable in its own right, the data don’t show that lack of immigration is responsible for the decline in the start-up rate or that more open immigration would be likely to reverse the three-and-a-half-decade-long drop in business formation.

Robert Litan, a Non-Resident Senior Fellow in Economic Studies at the Brookings Foundation and others have argued that immigrants are much more likely than native born Americans to start new businesses. However, the data suggest otherwise. As Steven Camarota, the Director of Research for the Center for Immigration Studies, explains in a 2012 report (PDF):

“There is no meaningful difference between the two groups in self-employment…. Immigrants and natives have very similar rates of entrepreneurship — 11.7 percent of natives and 11.5 percent of immigrants are self-employed.”

Similar patterns can be seen from other data. Bureau of Labor Statistics figures show that in 2013, the most recent year data are available, rates of incorporated self-employment — people working as the heads of their own corporations — among foreign and native born Americans were a statistically indistinguishable 3.8 percent rate for those born outside the country and 3.7 percent of those born inside.

The absence of a higher rate of entrepreneurship in the immigrant community explains why we have not observed an increase in entrepreneurial activity over the past three-and-a-half decades.

As the chart above shows, the foreign born share of the U.S. population more than doubled from 6.2 percent in 1980 to 12.9 percent in 2010, while the rate of new business creation declined 35 percent, from 1.98 new employer businesses per thousand people in 1980 to 1.28 in 2010. If immigrants really were much more likely than the native born to start businesses, then we should have seen a rise in new business creation, as immigration surged over the past three-and-a-half decades.

Contrary to immigration advocates’ claim that encouraging more immigration will boost levels of entrepreneurship in this country, the experience of the past 35 years has shown the opposite to be true. A steep rise in immigration did not lead to a rise in entrepreneurial activity, or even offset the decline in new business creation that we have experienced.

Rather than simply asserting that new policies to stimulate immigration “would increase startup rates” (PDF) in the future, policy makers seriously interested reversing the decline in the rate of entrepreneurship should identify the factors responsible and propose policies to reverse it.

Image Source: Created from data from the U.S. Census