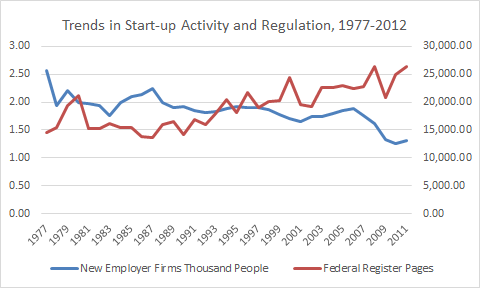 Small business owners are increasingly frustrated by government regulation, which they say has become a major problem in recent years. Twenty-two percent of small business owners surveyed to the National Federation of Independent Business’s November member survey (PDF) say that governmental regulation and red tape is the most important issue that they face today, just one percentage point fewer than the fraction that identified taxes the number one problem.

Moreover, the fraction calling regulation their biggest issue is far higher today than it was in the mid-1980s when roughly 10 percent of owners identified government rules and oversight as their number one problem.

Now researchers at a variety of think tanks are beginning to believe that government regulation is doing more than causing entrepreneurs to gripe. They are concerned that rising regulation could be keeping would-be entrepreneurs from starting companies.

Over the past three-and-a-half decades, federal regulation has been rising, while new business creation has been falling, as the chart above indicates. Researchers at the Ewing Marion Kauffman Foundation, the Hudson Institute, the Hoover Institution and the Heritage Foundation believe the pattern is more than a coincidence.

The per capita rate of new employer business creation and number of rules pages in the Federal Register — a common measure of the scope of federal regulation — correlate -0.67 over the 1977 to 2012 period. Similarly, the per capita rate of business creation and the number of pages in the Code of Federal Regulation — another frequently used estimate of government rulemaking — correlate -0.78 over the same period. (A correlation of 1.00 means that two numbers move in perfect concert.)

Correlation doesn’t imply causation, of course. But researchers have several reasons to believe that rising regulation is deterring entrepreneurship. First, as Jonathan Ortmans, a Senior Fellow at the Ewing Marion Kauffman Foundation, told the U.S. House Committee on Small Business, Subcommittee on Contracting and Workforce in September, more regulations increase the complexity (PDF) of running companies. This, in turn, deters people from starting them. Second, as Anthony Kim of the Heritage Foundation explains, the rising cost of complying with regulations makes marginal entrepreneurial endeavors uneconomical, which also causes the start-up rate to decline.

Rising regulation is particularly problematic to entrepreneurs. Existing businesses often have experience in dealing with regulators and in complying with their rules, which allows them to find better and cheaper ways to manage the regulatory burden. Moreover, regulatory compliance often has a high fixed cost. As a result, smaller businesses (which tend to be younger) usually face a higher cost of adhering to regulations.

So What Can We do to Fix the Problem?

One idea is to limit regulation on new companies. John Dearie, Executive Vice President of the Financial Services Forum has suggested that Congress limit rules on businesses less than six years old to only “essential product safety, environmental, and worker protection regulations.” A young-company-regulatory-exemption would allow entrepreneurs to get their businesses up and running before facing the onslaught of federal rules, which would encourage more people to start companies.

Another idea is to cull from the rulebooks regulations that are out of date and unnecessary. The creation of a federal commission to review regulations and to suggest to Congress those that could be eliminated and the inclusion of sunset dates on all federal regulations are two ways to trim the regulatory underbrush.

While policymakers might not want to adopt these suggestions, they need to act. The evidence is mounting that rising regulation is hindering entrepreneurial activity.

Image Source: Created from data from the Census Bureau and the Office of the Federal Register