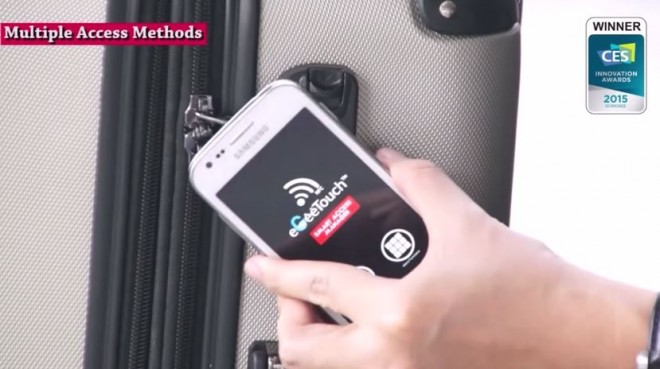 Small business owners who are bounding from hotel to airport and the other way around put a lot of stock in their luggage. But keeping valuables in your travel bags may not be the best idea, especially if they’ll be out of your sight for any period of time.

Digipas is hoping its latest offering in smart lock technology, the eGeeTouch Smart Luggage Lock, will have you thinking differently about what you feel safe putting in your luggage.

This video gives an overview of how the eGeeTouch works:

The idea behind the new device is simply that the locks that come with bags can be unreliable. Bags can be easy to access, either because they are notsecure or are too easy to open.

Digipas’ eGeeTouch works by securing the zipper pulls on your bags in the company’s patented smart lock system. eGeeTouch employs the use of NFC to toggle the locking mechanism. Rather than using a combination or some cheap keys, the eGeeTouch needs to be unlocked with a signature device or app.

In a press release accompanying the unveiling of the Smart Luggage Locks, the company says:

“Concerns over security of valuables inside luggage is undeniably justified especially when luggage is left unattended in areas such as an airport, train, ferry compartments, hotel concierge or a hotel room.”

There are two versions of the device currently awaiting a formal release on the market, an embossed and debossed version.

The eGeeTouch fits onto any bag with zipper pulls. The embossed model grabs the pulls on the side of the lock while the debossed version hooks the pulls to the top of the lock.

A user has several options for unlocking their bags from the grips of the eGeeTouch:

Smartphone App: Users with the eGeeTouch on their bags can download a free app to their smartphone or tablet that’s NFC-enabled. One tap inside that app and the locks can be freed when it’s placed near the lock.

NFC Tag/Sticker: For users without an NFC device, Digipas includes a signature NFC tag and sticker that can be used to send a signal to the lock to release the seized zipper. One tap of the tag against a beacon on the lock will work, the company says.

Key: For times when either your smartphone or tablet has a dead battery, or you’ve misplaced the NFC tag, Digipas includes a traditional key (similar to an ignition key for a vehicle) that can release the locks.

The locks are TSA-compliant, according to Digipas, so the new devices shouldn’t cause too much fuss at the airport scanners. Any suspicious agent could use the key provided to unlock your bags, if they really needed to.