What if Only 100 People Existed in the World? 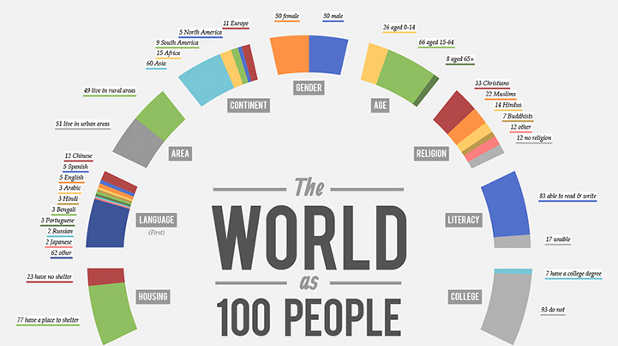 The diversity of our human race is often mind-boggling. We’re roughly split 50/50 between the sexes, but what percentage of the world’s population are children? What percentage lives in Asia? What’s the breakdown of college vs. non-college educated?

The 100 People Foundation released data about the world as 100 people to celebrate the world population hitting 7 billion. London-based graphic designer Jack Hagley created an infographic “The World as 100 People” to accompany the release.

So, what would the world look like demographically if 100 people accounted for the entire human race?

There would be 26 children and 74 adults. Of the 100, 60 would be Asian, 15 African, 11 European, 9 South American, and only 5 North American. The infographic visualizes not only the demographics of a world with 100 people, but also how many have housing, food and water, education, the Internet, and much more.

For example, if the the world had only 100 people, only seven would have a college degree, 30 would have Internet access and 25 would not own phones.

The image has been broken down into several images below (with the full graphic at the top) so that all of the detailed information can be easily read. Take a look – what surprises you?