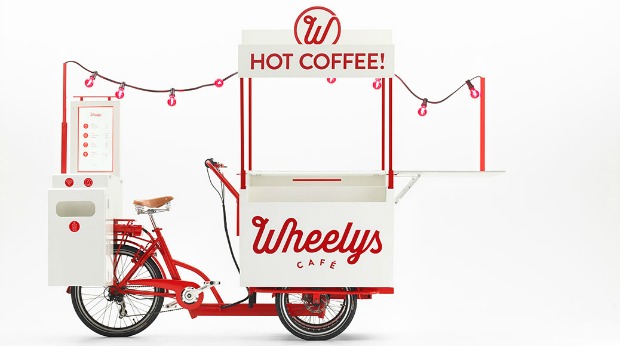 Having a physical location for your business can be both a big expense and a drain on resources. But some resourceful entrepreneurs have come up with a way to fit everything you need to run a small café into just a bicycle cart.

Wheelys Bicycle Café is the brainchild of The Nordic Society for Invention and Discovery (NSID). The idea is to allow entrepreneurs to purchase their own Wheelys business that they can set up in different locations around the world.

Entrepreneurs can buy their own Wheelys franchise with an initial investment of $3,450. That includes the bicycle, equipment, and technology it takes to run a small mobile coffee shop.

The organization first ran an Indiegogo campaign over the summer, raising almost three times its original fundraising goal. And within a few months of its official launch, independent operators in 10 different countries had purchased about 30 of the Wheelys cart businesses.

And now NSID is working on a new version. Wheelys 2 is an electric version of the bicycle café that uses a battery pack and solar panels to power its many features. Currently, the campaign has raised just over a third of its $30,000 goal with more than a month remaining.

Mobile food carts aren’t exactly a brand new idea. But this one does offer an interesting all-inclusive model. The $3,450 buy-in is less than 1 percent of what it would cost to launch a Starbucks franchise, according to Wheelys’ Indiegogo page. And since coffee can be a high profit margin product with low overhead, owning a Wheelys business could be both lucrative and low-risk.

While the organization is already realizing some success with its base model, the Wheelys 2 offers an even more eco-friendly version. So it could appeal to the increasingly large group of socially conscious young entrepreneurs around the world.