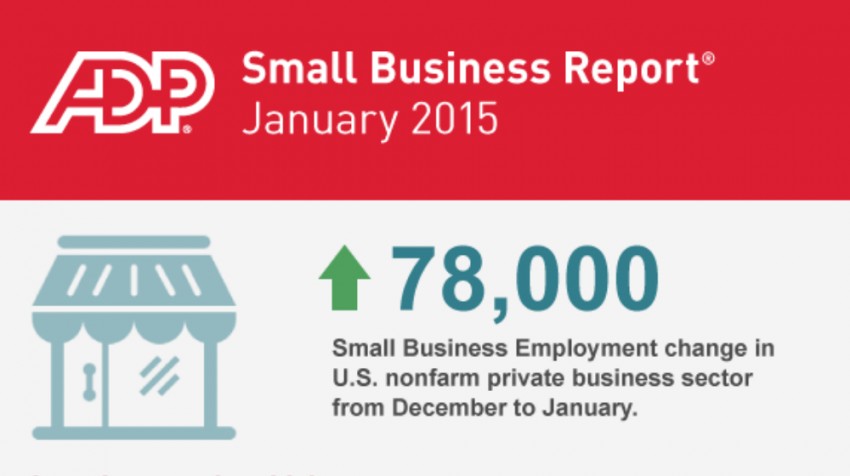 Small businesses added 78,000 jobs from December to January, at a rate faster than the country’s largest companies.

That figure comes from the monthly ADP National Employment Report issued Feb. 4, 2015. But it marks a slowdown in growth for small businesses, as it pertains to employment totals.

Despite the dip in growth, Mark Zandi, the chief economist at Moody’s Analytics, says that 2015 should mark a year of growth overall.

Zandi said in a statement accompanying the report:

“Employment posted another solid gain in January, although the pace of growth is slower than in recent months. Businesses in the energy and supplying industries are already scaling back payrolls in reaction to the collapse in oil prices, while industries benefiting from the lower prices have been slower to increase their hiring. All indications are that the job market will continue to improve in 2015.”

ADP’s report considers small businesses any with 49 or fewer employees.

Large companies added just 40,000 jobs from December to January. This segment of companies, like small businesses, slumped a little in its growth total from last month.

Overall, there were 213,000 jobs added by all private, non-farm jobs between December and January.

Breaking down the figures among small businesses, the smallest of them — those with 19 or fewer employees — added about 38,000 jobs. Those with 20 or more added about 40,000 jobs between December and January.

Most of the total small business jobs created are in the service sector. That’s where about 73,000 of the 78,000 new jobs were added. Goods-producing companies added about 6,000 jobs, according to ADP’s estimates.

Nationally, the service industry added the most jobs in the last month, a total of 183,000 of them. That rate of growth is down, however, from the 203,000 service jobs added between November and December.

Carlos Rodriguez, the president and CEO at ADP said in a statement:

“January marks another month of solid job gains and is in line with the NER’s twelve-month average of over 200,000 jobs added per month.”