Small Business Lending is Up Again, Depending Upon the Lender 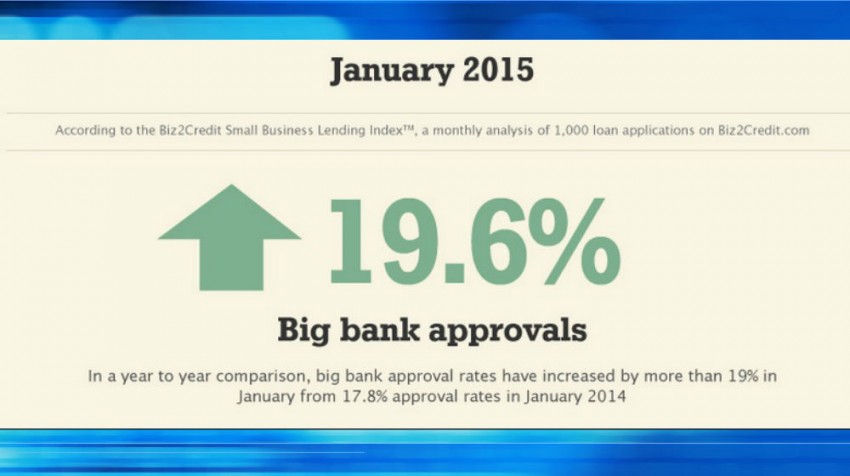 Small business lending set another record in January 2015. But that record is being set mostly by big banks and certain other kinds of lenders.

In January, lending approval rates for small businesses at big banks hit a post-recession high. New data from the Biz2Credit Small Business Lending Index reveals that loans from big banks to small businesses in January were approved 21.3 percent of the time.

That’s up from 21.1 percent in December 2014. Last month’s approval rate was the highest for small businesses since the end of the Great Recession, according to the Biz2Credit data.

And the uptick in approval rates continues a trend. The index derives from a monthly analysis of 1,000 small business loan applications processed through Biz2Credit.com, an online lending platform. For purposes of analysis, the index classifies a “big bank” as having more than $10 billion in assets.

“Big banks set another Index high because they are willing and able to make large loans and still have an interest rate advantage over competitors. The big banks typically seek to grant loans in excess of $2 million.”

The same record-breaking news is being heralded from institutional lenders, too. The January numbers show that these lenders approved 60.5 percent of the small business loans they received last month. That’s also a post-recession high, though Biz2Credit has only been tracking these institutions since January 2014.

Small businesses typically seek out institutional lenders for loans of up to $1 million. So these approval rates are encouraging to small businesses seeking larger amounts.

But for those entrepreneurs seeking a smaller loan, a smaller bank is likely the first choice.

In January, these banks approved only 49.6 percent of the loan requests they got from small business owners. That’s more than double the approval rate being trumpeted for big banks, but it also represents an eighth straight month of decline.

In December, approval rates for loans at small banks was at 49.7 percent. The latest data marks the third month in a row in which small banks turned down more loan requests than they approved.

“Small banks are in a crunch; they cannot compete with the brand name advantages and low rates of big banks. Meanwhile, they haven’t kept pace with online and mobile loan applications when institutional lenders are investing heavily in it. Small banks can’t make decisions as quickly, and borrowers are going elsewhere.”