What the Declining Number of Employer Startups Really Means 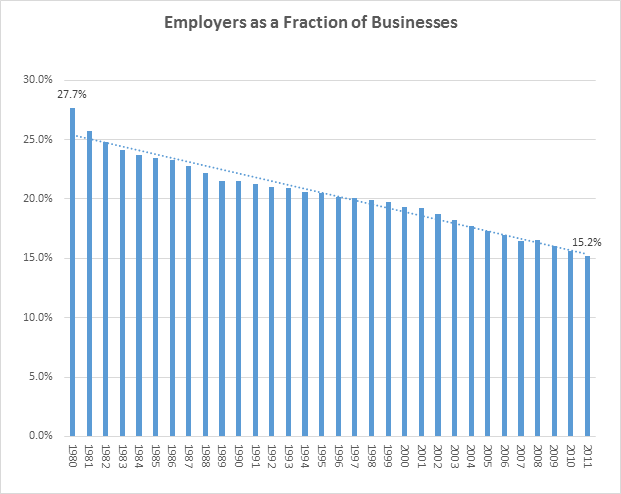 Jim Clifton, the CEO of Gallup, argued in a recent article that the recent pattern is America’s “single most serious economic problem” and that “economy is never truly coming back unless we reverse the birth and death trends.”

While I agree with Mr. Clifton and others that the three-decade long decline in the new employer creation rate is distressing, I believe that the problem it reveals is more subtle than his article lets on. Taken in conjunction with other data, the decline in the rate of employer firm formation indicates primarily that American business owners are becoming less willing to hire others.

Because of the rise in non-employers, there were nearly twice as many businesses per capita in the United States in 2011 than there were in 1980, Internal Revenue Service (IRS) data reveal. Moreover, both the fraction of American income tax returns with business income (or loss) and the share of individual tax returns with the self-employment tax deduction have increased over the past two decades, IRS statistics indicate.

Income from business ownership has gone up over the past 25 years. According to the Federal Reserve’s Survey of Consumer Finances, the share of Americans’ before-tax family income generated from business ownership rose a non-trivial amount between 1989 and 2013. In addition, IRS data show that the average net income of pass through entities – sole proprietorships, partnerships and sub chapter S corporations – more than doubled between 1980 and 2010, when measured in inflation-adjusted terms, and that “entrepreneurial income” increased from 5.4 percent of Americans’ taxable income in 1977 to 8.5 percent in 2011.

Even the number of employer businesses per thousand Americans didn’t start to decline until very recently, remaining largely steady between 1987 and 2007. The period of stability suggests that the rate at which employer firms were started and failed remained in rough balance for 20 years. While the Great Recession triggered a rise in failures of employer businesses and a decline in employer start-ups, in 2011 the per capita number of employers remained higher than it was in the late 1970s and early 1980s.

Source: Created from data from the U.S. Census and the Internal Revenue Service.