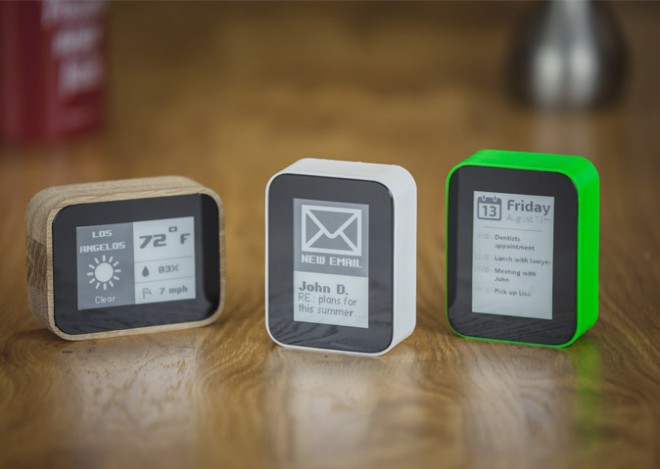 Chances are you receive a lot of notifications. As the Internet grows, there seems to be more and more information for you to track. Email, social media, stocks, and who knows what else.

You can use your smartphone or your computer to check all these notifications. But Displio is a desktop gadget looking to make checking notifications hands free and at a glance.

For more information on Displio check out the Kickstarter video below.

Displio falls under the Internet of Things category. It’s small, with a 2.7 inch e-ink screen, and stands alone without the need of a smartphone or computer. The device’s developers claim Displio’s WiFi display is customizable and allows you to choose from a wide array of widgets.

It’s minimalistic design has no wires or buttons. Instead Displio is controlled by tapping, shaking, or flipping the device. One of it’s most touted features is it’s long battery life. Developers say the gadget lasts up to a month on a single charge.

The most interesting capability is that Displio apparently allows anyone to develop their own widgets thanks to an easily available API. Displio also features WebClip, an app that allows you to create a widget from any website.

The team behind Displio is a part of Draugiem Group, a Latvian IT firm. The company has been around since 2004 and has experience and facilities for creating software and hardware. Though the company is located in Europe it also has a U.S. branch in Burbank, CA.

To launch Displio, Draugiem Group started a Kickstarter campaign that has already earned over $100,000. Draugiem Group may not need to raise funds through crowdsourcing, but the campaign has helped gain exposure and momentum for its product.

In an interview with TechCrunch, Displio co-founder Raivis Lancetovs says Displio began as a simple idea. It was supposed to be a physical counter for Facebook ‘likes.’ In theory it was something businesses could display for customers to see and promote their Facebook pages. Lancetovs told TechCrunch:

“We made a couple of simple widgets to test this out. Like weather, stocks and a FitBit leader board (which was something the team was internally competitive about). We instantly saw that this could be a fun and useful little gadget for anyone and could be used at work and home. And with almost every Internet service and product offering APIs, there are so many different widgets we or anyone else could make.”