Enjoy Your Morning Coffee with This Intricate Eiffel Tower Sculpture 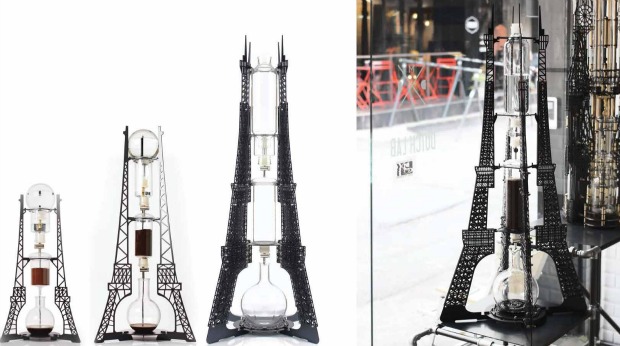 There’s no wrong way to enjoy a cup of coffee. But thanks to South Korean design studio Dutch Lab, there is now a pretty elaborate way to add some culture to your morning java.

“The Seoul-based company mimics the structure and intricacies of Paris’ famous romantic landmark. Its French-inspired beauty provides a way to hold the coffee-making mechanisms such as the tubes and drip valves. The combination of its black, full-aluminum body with brass plating and glass makes for an elegant statement piece in any room.”

It isn’t meant to be a simple, practical kitchen appliance that hides in the corner or inside a cabinet. It’s meant to be a work of art that people can display in their homes. And it also happens to brew coffee.

And as a cold brew coffee tower, it’s not super practical in that arena either. The model uses three glass flasks to let water drip through vertically, using no electricity. The process can take about 12 hours, so users should start the process at night so the coffee is ready the next morning.

It’s a process that true coffee aficionados will appreciate, as it produces a less acidic brew. And the structure, which goes for $340, is something that will appeal to true architecture, travel, or design enthusiasts. Either way, the product is designed to appeal to a very specific set of customers. But unique and well-designed products can usually find enough people in a particular niche to get by.

In addition, the company has other models designed to mimic other structures like Big Ben and the Empire State Building.