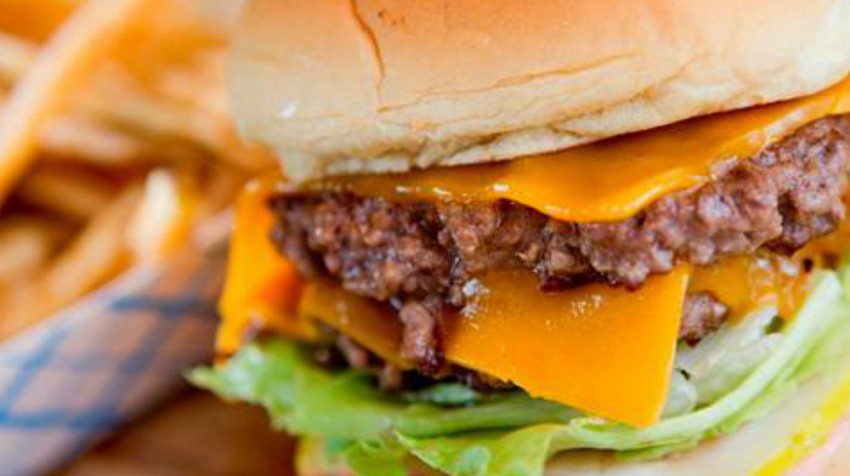 The fast food burger franchise is the only one of its kind that boasts fresh, organic meat from grass fed cows instead of grain fed. Not only are the burgers fresh, but the French fries have a twist on them, too. They are fried in olive oil as opposed to vegetable or canola oil.

Side menu items include fries, of course, but other options like a side salad and mandarin oranges are also offered.

The franchise has hammered home this brand distinction again and again based on its quality of ingredients.

“Our ingredients matter, and our grass fed beef comes from a co-op of family farms, but the exact locations of the farms are a trade secret.”

In fact, “Ingredients Matter” has become the restaurant’s slogan, and greets visitors from all the company’s promotional material, including paper cups used for the beverages sold with every meal.

Like many businesses, Elevation Burger began with a simple idea. Founder Hans Hess used to live on the West Coast for many years. But when he moved away from California, he could not find any burger that he truly enjoyed, so he decided to create his own.

Hess opened his first store in Falls Church, Virginia, in 2005 and saw so much success that he began to franchise his business in 2008.

Still headquartered in Virginia, the business has grown both domestically and internationally. There are more than 30 stores in the United States and 16 international locations including Bahrain, Dubai, and Kuwait.

However, it is the location of some of these franchises, particularly in the Middle East, that led to another of the company’s unique innovations, and one that has opened it to a much wider customer base. Giglio explains:

“Our burgers are halal, so it goes along with religious standards of the people living there.”

The Middle East has a high concentration of Muslims who follow strict dietary guidelines in terms of the specific kinds of foods they may eat and how a meal is prepared.

For Elevation Burgers to be considered Halal (suitable for consumption by Muslims), the beef used must be killed and processed in accordance with Shari’ah law.

Since Elevation Burgers follows these guidelines, they appeal to the largest religious population in the area. The franchise has done so well internationally more store openings are in the works although the next exact location has not been announced yet.

Before his restaurant opened in South Portland, Maine, in 2012, for example, both the franchisee and some staff traveled to Elevation Burger headquarters for a 22-day training course.

And corporate headquarters also sent a team to the South Portland location for another course lasting 10 days to train the remaining staff.

The franchise also spends a lot of time trying to make Elevation Burger an enjoyable workplace for everyone from cashiers to cooks. And the company works hard to communicate with franchisees and their employees about the difference between Elevation Burger and other fast food restaurants. Management believes this effort will translate into a different experience for customers.

And that process is working, says general manager Joe Gomez of Elevation Burger in Houston, Texas. In a telephone interview, Gomez says he enjoys seeing families come to his restaurant, explaining:

“I like that families can come here and know our food is different. We take pride in what we make, and we know the customers like it too because we make upwards of 50,000 burgers a week.”

In 2014, Elevation Burger added an important new member to its management team. Former executive for McDonald’s, Rick Altizer took over as Chief Executive Officer and brought new plans of his own.

Elevation Burger continues looking to expand its franchise and has also expanded its menu adding items like the Barbeque Bacon Cheddar Burger.

Altizer plans to continue expanding the reach of Elevation Burger, focusing on new store locations in the next year in the Midwest and Southeast. And there are hopes to one day expand to the West Coast, too.

Shannon Lamoreaux is a staff writer for Small Business Trends. Even though she is from Rhode Island, she has discovered she is a true Southerner at heart, and she moved to Mississippi to obtain her bachelor degree of science in communication and journalism minor from Mississippi College.
4 Reactions
Subscribe
Follow @smallbiztrends
RSS LinkedIn Pinterest iTunes