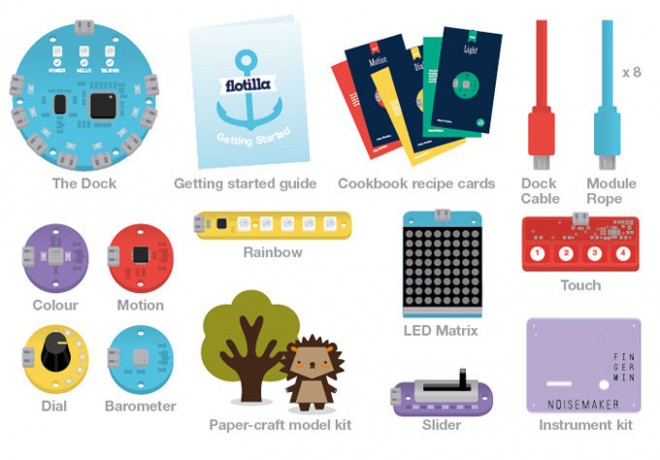 The guys behind the colorful start-up Pimoroni like their Raspberry Pi.

We are not talking about the delicious dessert but rather the credit card sized computer.

Pimoroni got its start making Raspberry Pi cases, called the Pibow. Now the company is branching out into other Raspberry Pi accessories.

Pimoroni is currently running a Kickstarter campaign for Flotilla, a plug-and-play hardware kit for digital tinkering.

Flotilla is not Pimoroni’s first Kickstarter campaign. Back in 2012, its campaign for Picade, a DIY arcade cabinet that ran on Raspberry Pi, was successfully funded. With Flotilla, the company is taking the same idea of hardware that runs on Raspberry Pi and gearing it to hobby enthusiasts and Makers.

Flotilla is a range of modules that can be connected together to create interactive projects. The modules include items like motors, lights, touchpads, dials, and sliders. Pimoroni says its goal is to make digital tinkering easy and affordable for total beginners as well as experienced Makers.

For more information on Flotilla check out this video:

To help customers along, Pimoroni has created two Web based apps, Cookbook and Rockpool. Cookbook provides ‘recipe cards’ for projects that simply require plugging in the corresponding modules. Projects are said to be for things like virtual pets or line walking robots. Paper craft instructions on these recipe cards add cuteness. Rockpool takes things a step further allowing users to create their own set of rules without any programming knowledge.

For those who are already familiar with coding and don’t need the extra help, Pimoroni claims Flotilla already supports Python and will support Scratch in the future. Pimoroni says it already has Python libraries and documentation available.

A drawback to the Flotilla system is cords. On the one hand, the modules do not require their own batteries. However, this also means projects are tethered to a Raspberry Pi. That means you won’t be able to make a cordless creation.

Flotilla’s simple plug and play modules could open up digital tinkering to all skill levels. Flotilla is not the only product like this out there but Pimoroni is putting their own spin on digital tinkering made easy.