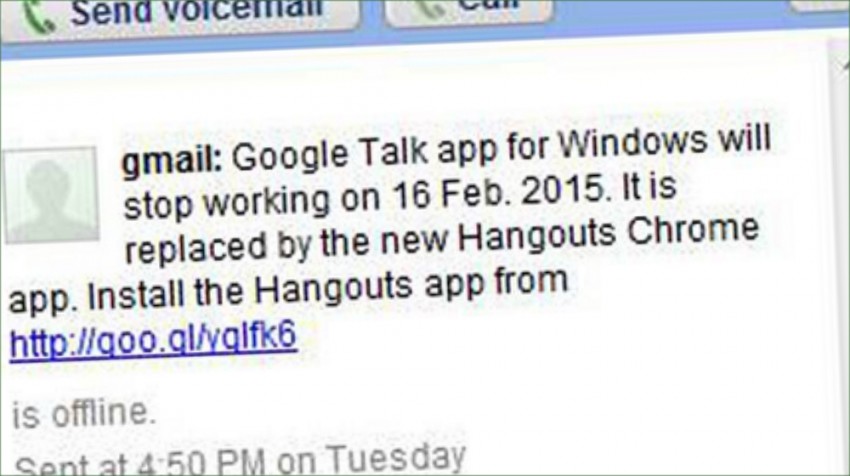 Google chat users who’ve been holdouts against Hangouts have probably hoped this day would never come.

But recently, the company notified fans of the Windows version of Google Talk (affectionately known as Gtalk) about Google Talk shutting down as of Feb. 16.

The message (see the image above)  sent out to users on Feb. 4 via the Google Talk platform said simply:

“Google Talk app for Windows will stop working on Feb. 16 2015. It is replaced by the new Hangouts Chrome app. Install the Hangouts app from http://goo.gl/yglfk6.”

So this means small business owners and others who have used the Windows download version of Google Talk for collaboration need to find another option after Feb. 16 .

In order to use Google instant messaging after that date, users must install the Google+ Hangouts app through the Chrome Web browser. See the video below:

There will still be a native version of the IM app available when users are signed into the Gmail on their  computers.

Chats in Google Drive are not impacted by the announcement, either. These chat forums allow collaborations in real-time on documents, spreadsheets, presentations and other projects created within Drive.

Google warned it planned retiring the Windows version of Google Talk way back in December of 2013. At the time, the company predicted the shut down might happen as early as February 2014. But apparently Google chose to delay the time table by an entire year.

So Google Talk fans benefited from that delay by having the app to use almost a whole extra year. But Google stopped updating security for Gtalk and it blocked all new downloads of the app.

Instead, Gtalk hopefuls were directed to the Hangouts app download page.

For whatever reason, some Google users never made the switch from Gtalk to the IM relaunch of Hangouts.

A report at TechWorm.net notes that Google Talk was a savior for owners of entry-level, low-memory smartphones. It’s demands on a smartphone are far less than Hangouts.

Hangouts is now one of Google’s most marketed products. It features voice and video conferencing, instant messaging, and file sharing in a professional but casual platform.

Google markets Hangouts for small businesses to use as a video conferencing and marketing platform, too.