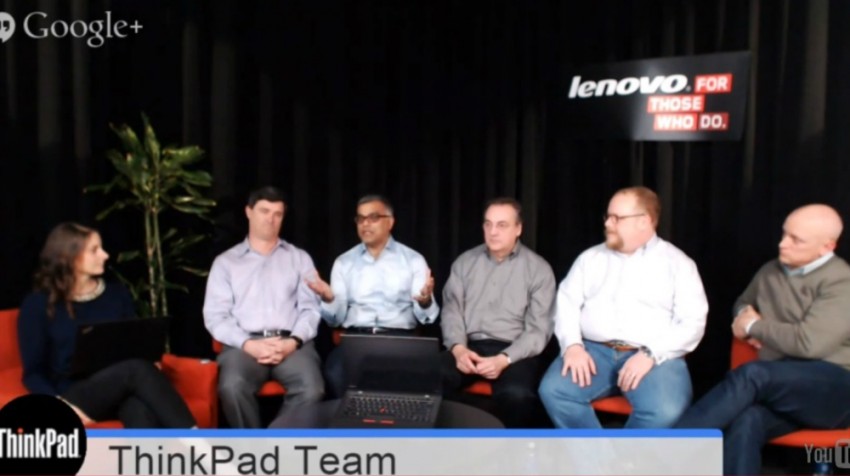 Lenovo is celebrating the shipment of its 100 millionth ThinkPad.

It took a little more than 20 years to hit the milestone. And Lenovo, the current maker of ThinkPad devices, marked it with a live Google Hangouts On Air event on Feb. 10, 2015.

The event featured a roundtable discussion and Q-and-A session with key members of the Lenovo ThinkPad team. The public was able to type in questions alongside the forum and have them addressed by the team.

Lenovo believes that customer loyalty specific to the ThinkPad has led to its longevity in what has become a very competitive field. After all, to sell that many computers over time requires a lot of satisfied customers.

But Lenovo’s vice president of Think Design, David Hill, says that it’s the many customers and their genuine interest in ThinkPad that has helped sustain the brand. During the live event, Hill explained:

“I’m proud that there’s a following for ThinkPad. It’s a source of pride, definitely. People are so enamored with ThinkPad and interested in ThinkPad. They want it to be successful.”

The Lenovo team agreed that customer input over the years has led to innovations and that the company has listened.

Dilip Bhatia, vice president of Global PC Design and Marketing at Lenovo, said during the event:

“This is a huge milestone, not only internally for Lenovo, but also externally for the industry. There are very few brands that have lasted 20-plus years.”

ThinkPad was first released in 1992, according to an IBM database. The device was manufactured by IBM until 2005 when the brand was purchased by Lenovo. When it was launched, the first model also featured the premiere of the TrackPoint on-screen navigator with its famous red button right in the middle of the keyboard. This replaced the traditional mouse (at a time when they were typically wired to a laptop) and added to the ThinkPad’s portability.

At the time, its specs were considered revolutionary and would change the way business was done. Though the specs on that first device seem comical by today’s standards. It had a 10.4-inch display with a 25MHz 486 processor, 4MB of RAM and 4MB of storage.

Check out how ThinkPad stacked up against the competition in the business devices market back in 1995. This commercial for ThinkPad from 1995 stars TV comedian Paul Reiser:

In 1993, the ThinkPad 750 became the first modern notebook computer to achieve space flight, according to entries (PDF) in the IBM archives.

The laptop was taken aboard Space Shuttle Endeavor. On a mission to repair the Hubble Space Telescope, NASA astronauts used the ThinkPad to conduct an experiment on the impacts of space radiation on human memory.