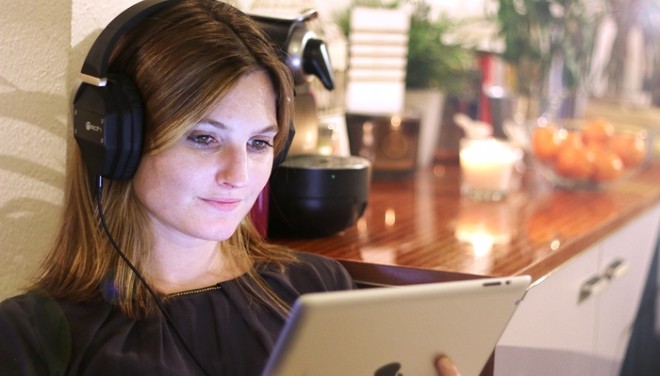 Technology is becoming smarter and more personal. Virtual reality is popping up everywhere. Gadgets and tools are coming out with the ability to predict and track your movements, adjusting to provide a more immersive experience. Such is the goal for 3D Sound Labs’ new Neoh headphones.

3D Sound Labs is calling their headphones a wearable home theater. Neoh is suppose to provide the experience of surround sound without the need to install multiple speakers that only work in one room. The company claims Neoh can virtualize twenty-five different speaker channels. But this is not what makes Neoh intriguing.

Neoh is said to be equipped with software, sensors, gyroscopes, accelerometers, and magnetometers. The purpose of all this tech is to create 360 degree spacial sound that follows your movement. Basically, Neoh can track your head.

Neoh uses Bluetooth, so there are no wires. While wearing Neoh, you can walk about the room and the headphones will adjust to make it feel as if the sound were coming from a fixed point; or so the claims go. For example, if you turn your back on whatever you are watching, the sound would adjust to seem like it were coming from behind you.

The technology is limited however. Right now Neoh can only track your movements if it is used in tandem with an app for iOS. 3D Sound Labs has plans to include Android devices, laptops, and gaming systems in the future. Without the app, Neoh can still be used but functions as a regular pair of headphones.

3D Sound Labs revealed their Neoh headphones at CES 2015 and are now running a Kickstarter campaign to launch their product. The campaign has raised over $119,000, more than meeting the goal.

For more information on Neoh headphones, check out the Kickstarter video below.

The new headphones follow a trend toward virtual reality technology. With products like Microsoft HoloLens, Oculus Rift, and Google Glass grabbing attention, immersive technology is on the rise. Neoh is looking to add improved sound to the virtual reality experience.

Technology such as Neoh is another step toward making virtual reality and immersive technology an everyday thing. It seems there will soon be no end to gadgets and devices looking to make tech a personal experience. If Neoh can expand it’s usability, it could become a contender in the virtual reality market.