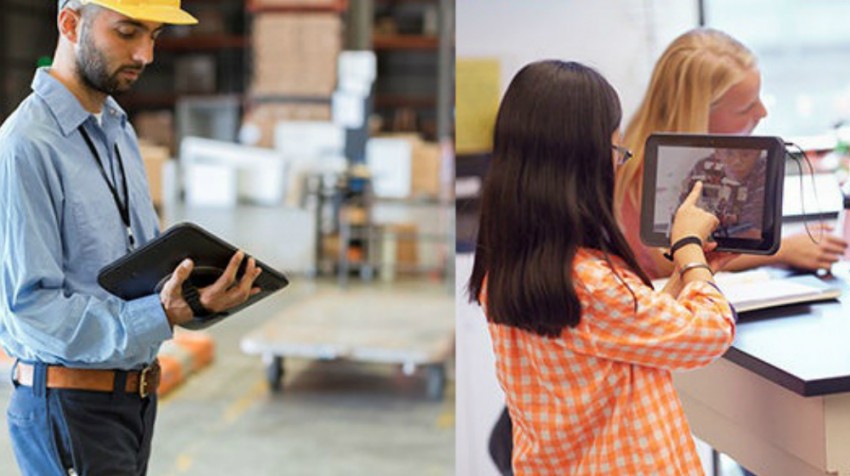 HP was all business when it introduced a truckload of new devices recently.

The company added new tablets and 2-in-1s to its line that it says are focused on making businesses more mobile.

Some of the devices are running Windows and others are using Android’s operating system. And nearly a handful of them are industry-specific tablets.

Here is a rundown of the tablets and convertibles now available from HP:

This is a high-definition, 8-inch (diagonal) display. The tablet will operate Android with a Qualcomm Snapdragon 800 series processor.

The 8-inch Pro Slate tablet is the first device available with the most durable Corning Gorilla Glass 4.

This has a starting price of $449 and is available now.

Like the smaller version, this tablet will also run Android’s operating system. It will, however, feature a larger display.

As the name suggests, this device will have a 12-inch diagonal HD display. The larger version starts at a higher price, of course. HP starts the larger tablet at $569.

Both the Pro Slate 8 and 12 can support a 4:3 aspect ration on the widescreen displays. This makes reading and editing documents easier to do.

HP says it has introduced both Androids and Windows devices so businesses have options and can choose based on what software and apps they favor.

The company says this “affordable” 8-inch tablet is built with the business person in mind.

It’s got a micro-HDMI port for connecting to another display. It’s sold with up to 64GB of internal storage and features an 8-megapixel rear-facing camera.

The HP Pro Tablet 408 G1 is also built for business functionality because it has a full version of Windows 8 Pro installed. HP says the base price for this tablet is $299.

This device is designed to make the patient care experience more convenient and personal.

The tablet is outfitted with a 2-D barcode scanner. This can be used to quickly call up personal information on patients, such as medications they’re taking or specific instructions for their care.

It can also be used to scan employee badges to ensure that security and privacy are a prime concern in an office.

This tablet is also designed for the medical office because it’s covered with an antimicrobial treatment. It can easily be cleaned, HP touts.

This tablet is similar to the healthcare device. It’s got the 2-D barcode reader but instead of being constructed for medical office, it’s meant for a tougher environment.

The battery on this Windows tablet can run for 20 hours and it’s been tested for both water and dust exposure.

These tablets – one a Windows and the other an Android – are designed with a “garage” for an optional stylus. There is also an option for a hard-wired keyboard.

To be precise, the HP Pro Tablet 10 EE runs Windows for an operating system. This device starts at $299 for education customers. The general public can have it starting at $349.

The HP Pro Slate 10 EE is an Android device. It’s available starting at $279.

HP is offering software solutions for educators that are designed with these tablets in mind, specifically, HP Services for Schools.

These devices are also built to withstand a more rugged environment, the classroom. Each is tested to withstand water and dust.

All these tablets crashing the market, HP has also introduced a 2-in-1 convertible device that also has a business bent to it.

This is an 11.6-inch display that works as either a tablet or fully-functioning laptop.

The Elite x2 will be available starting in late-January for at least $899.