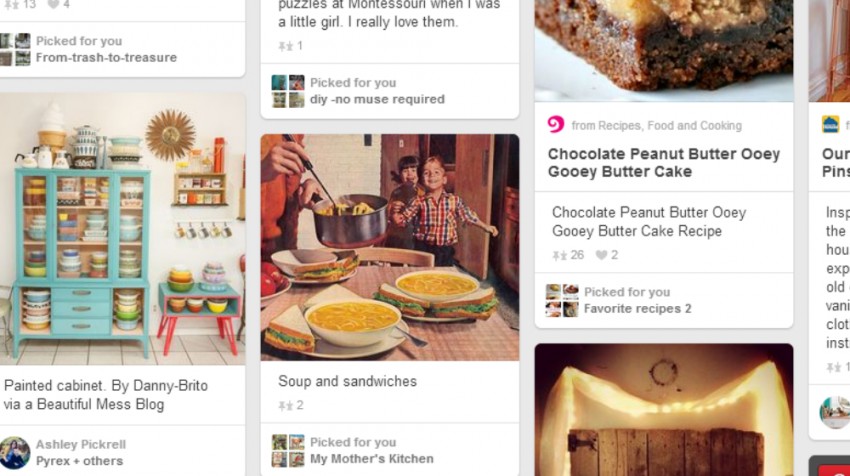 Your Pinterest home feed is getting awfully crowded lately.

The home feed is the landing page when you sign on to Pinterest. It had been the place where the latest and most popular pins from those you follow appear.

But then Pinterest Picked for You Pins were added.

These are Pins that Pinterest says it picks for you based on your interests.

According to a help page at Pinterest, the site even gathers your recent browsing history to recommend some Pins.

Well, apparently Pinterest has been picking too many pins for some users. And they’ve taken to the site’s official Oh, How Pinteresting blog to voice their frustrations.

One user comments the volume of ‘picked for you’ pins on the home feed is too much, explaining:

“Those ‘picked for you’ pins are far too many and not obvious enough. It takes me at least three times as long to go through my feed now — not only because if the increased volume, but because I have to double check before I click on a pin to see if it’s from someone I have chosen to follow.”

Pinterest Picked for You and Promoted Pins Not the Same

As if the addition of Picked for You Pins on users’ Pinterest home feed wasn’t enough, Pinterest also recently announced it was adding Promoted Pins too.

These are not the same as Picked for You Pins in that they are paid content from sponsors rather than picked solely based on your previous Pinterest activity.

They were first announced in 2013, and had become a regular feature by the following year.

But, until now, they’ve only been seen in search results and on Category feeds.

Still Pinterest claims that like the Picked for You pins, Promoted Pins are curated based on your activity.

“Of course, if you don’t like a Promoted Pin, you can always hide it from your feed and tell us why you didn’t like it. We’ll use your feedback to improve what you see in the future.”

“We want to make sure Pinterest is a service that’s here to stay for all of us, and advertising helps us ensure that happens.”

But it seems users are less upset about the fact that promoted pins are included than about the sheer number of pins being added to their home feed. One user explains:

“I understand the necessity for ‘promoted pins’ but absolutely HATE the ‘picked for you’ pins. I have more of these in my feed than pins from people I have chosen to follow.”

“As a business account holder, I get Promoted Pins– makes sense to monetize, and we all knew it was coming. The “picked for you” pins that are now flooding my board, however, do not make sense. I have carefully curated my home feed. From the beginning, I understood that good pins come from good pinners, and the key to quality is not quantity.”

Joshua Sophy is the Editor for Small Business Trends and the Head of Content Partnerships. A journalist with 20 years of experience in traditional and online media, he is a member of the Society of Professional Journalists. He founded his own local newspaper, the Pottsville Free Press, covering his hometown.
145 Reactions
Subscribe
Follow @smallbiztrends
RSS LinkedIn Pinterest iTunes