Small Businesses Get Their Groove Back, Says Experian Index 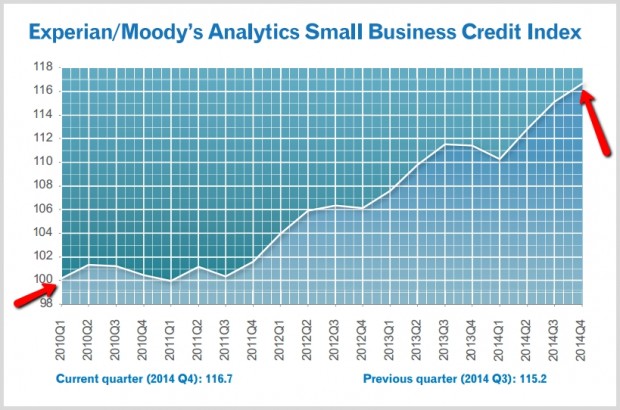 The Experian/Moody’s Analytics Small Business Credit Index has positive news for small businesses. The Credit Index for the fourth quarter of 2014 was released this morning. And for the third consecutive quarter, the Index has gone up, reaching a post-recession high. The positive news is a reflection of the following:

The Index and accompanying report was developed by Experian and Moody’s Analytics to measure small business credit conditions. It covers businesses with fewer than 100 employees. Each quarter the Index reports the overall results in a points score.

The Index analyzes a series of metrics connected to small business credit conditions including a risk score, “days beyond terms” score, bankruptcy rate and delinquency rate. Data is collected by state and region and also by industry. The Index also provides an interactive map so you can drill down into specific industries and regions.

The data that contributes to the Index and accompanying report comes from a variety of sources. “The delinquency rates, the ‘days beyond terms,’ the risk score and bankruptcy rates — all come from Experian’s Business Credit Data Base. This represents data from virtually all small businesses in the United States,” said Experian spokesman Jordan Takeyama.  The macroeconomic data, including housing market data and supplemental surveys, is provided by Moody’s, he added.