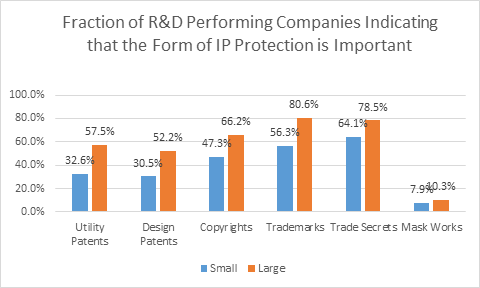 Despite the argument made (PDF) by some small business advocates that intellectual property (IP) “is the backbone of America’s innovative small businesses,” small companies are less likely than large ones to believe that legal forms of intellectual property (IP) protection are important to their operations, a National Science Foundation (NSF) survey of U.S. companies reveals.

The 2011 Business R&D and Innovation Survey, a massive effort to tap the views of 45,000 public and private for profit enterprises about their innovative activity, queried businesses about the importance to them of six forms of IP protection:

For small companies, trade secrets were the most important form of intellectual property protection, identified by 64.1 percent of companies, followed by trademarks at 56.3 percent of companies, and copyrights at 47.3 percent. Both utility and design patents were less important than these other three forms of IP protection, coming in at 32.6 and 30.5 percent of small businesses, respectively. Mask works were important to the smallest fraction of small companies (7.9 percent), probably owing to their very specialized nature.

Over time, intellectual property has become more useful to companies competing in high tech industries – the ones in which a high fraction of companies invest in R&D.

This trend makes the pattern shown by the NSF data troubling. As IP becomes more important to the competitive strategies of businesses, its lesser importance to small companies makes one wonder if small business owners are missing out on an increasingly valuable source of competitive advantage.

Image Source: Created from data from the National Science Foundation