ZipGripGo is the Zip Tie That Could Save Your Commute 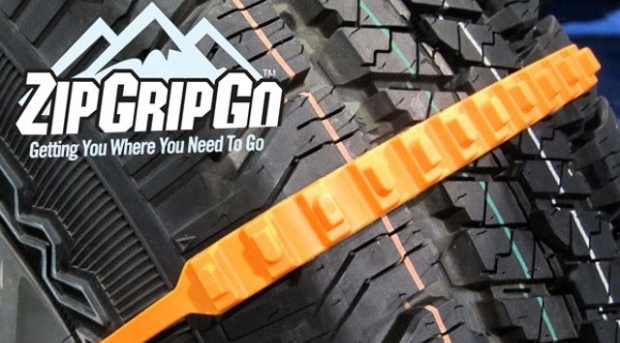 The morning commute can be a killer. Add snow into the mix and you may feel like you will never make it to the office. Chains are great in an emergency but they can be difficult to install and can cost a pretty penny. The team behind ZipGripGo have their own solution to the driving in snow conundrum. Zip ties!

It’s a simple solution that could turn out to be very clever.

ZipGripGo is essentially just a package of large zip ties that you can strap to your tires. The ties have what the company calls dual traction cleats to help give your vehicle the grip it needs to get moving after getting stuck in snow or mud.

Developers are currently running a Kickstarter campaign to raise funds and get their product on the road. So far the company has raised over $46,000. With more than twenty days left to go, they stand a good chance of making their $75,000 goal.

See the video for the new Kickstarter campaign below:


According to the Kickstarter campaign page, each tie is crafted out of specially engineered grade material that performs in both warm and cold climates. The material is suppose to be very durable yet also light. ZipGripGo claims that anyone can install the ties.

Each tie is one time use only. The ties are installed just like a zip tie and are then cut off after use. ZipGripGo can fit rims up to 22 inches, but as of now that is their limit. The ties do not work on steel rims.

On its Kickstarter campaign page, the company talks about the three years spent researching and developing the product. In 2013, it even won Popular Mechanics Editors’ Choice Award for Top Car Tech of SEMA (Specialty Equipment Market Association).

ZipGripGo previously had a limited run in order to get more feedback and conduct extensive testing. And on the product’s Kickstarter page, developers state:

“With a full patent now secured the team manufactured a small run of version 2, which is ready through this campaign.”

ZipGripGo is off to a good start with less then $30,000 left to raise. The company has already had one an initial run of the first version of its product so successfully delivering a second should not be a problem. Still, time will tell how much success ZipGripGo achieves.