ADP: Slowing in Small Business Job Creation No Cause for Alarm 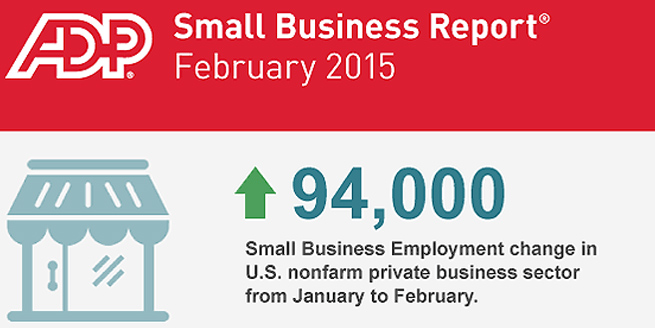 Job growth continues to drop across the U.S., but it’s a downward trend that shouldn’t cause much alarm.

And even though that figure represented a dip, Mark Zandi, the chief economist at Moody’s Analytics, says there’s no reason for alarm. Small business jobs grew at a blistering rate before this slowdown, so it’s expected these numbers would take a dip.

“Job growth is strong, but slowing from the torrid pace of recent months. Job gains remain broad-based, although the collapse in oil prices has begun to weigh on energy-related employment. At the current pace of growth, the economy will return to full employment by mid-2016.”

Moody’s Analytics, together with ADP, release a monthly jobs report. The jobs are tallied by company size and whether they provide goods or service to the public.

That “torrid pace” Zandi refers to ended in 2014. For six of the last seven months of the year, small businesses added at least 106,000 jobs per month.

Of those 94,000 jobs added last month by the country’s small businesses, more than half were at companies with 20 or more employees. There, 55,000 jobs were added in February.

Most of the jobs added last month were at companies providing services to customers. About 79,000 jobs were created at these companies last month.

The 212,000 jobs added nationwide last month marked the fourth consecutive month of slowed growth. In January, all companies added 250,000 jobs, according to results from ADP’s National Employment Report for February.

Still, for the last year, each month companies have added at least 200,000 jobs. That’s a point highlighted by Carlos Rodriguez, the president and CEO at ADP. In a statement, Rodriguez said:

“What is also encouraging is that job gains are broad-based across all key industries.”

One key sector that actually saw an increase in the job growth rate was financial activities. There 20,000 jobs were added at companies within this sector last month. That’s up from the 15,000 jobs created in January.