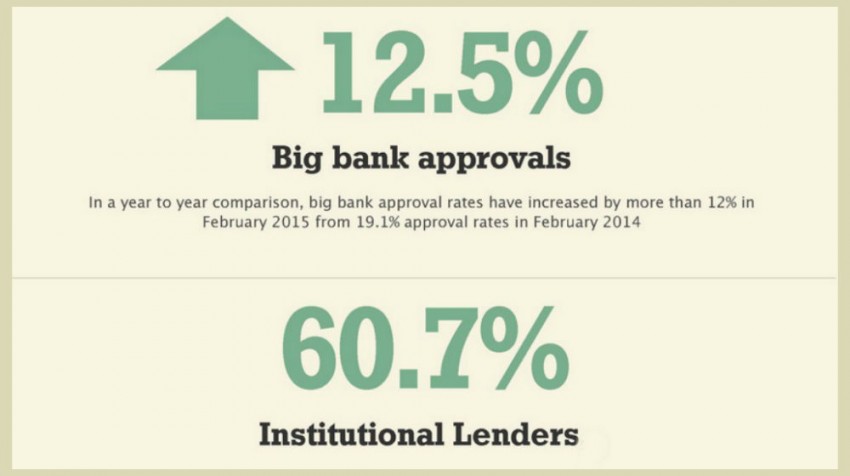 Small businesses continue getting loans approved by big banks, and in record numbers.

Hitting its highest point since the end of the Great Recession, the loan approval rate for small businesses at big banks reached 21.5 percent in February.

That’s according to the February 2015 Biz2Credit Small Business Lending Index. The index is based on a monthly analysis of 1,000 loan applications on Biz2Credit.com. The platform seeks to connect small businesses with potential lenders.

The approval rate at big banks for small business loans jumped two-tenths of a percent from January to February. January’s rate of 21.3 percent had been the previous post-recession high.

In a prepared statement accompanying the official release, Biz2Credit CEO Rohit Arora says big banks owe their success to a variety of factors. He explains:

“Big banks are starting to grant more conventional loans. This allows them to keep fixed loan expenses down compared to SBA-backed loans, which are not primarily being done at smaller banks. The investment in digitization at big banks has helped expedite the small business loan approval process.”

And since the beginning of 2014, when Biz2Credit created a special category for institutional lenders, this rate has continued to climb.

Arora says the ability of institutional lenders to identify potential problems early plays a role in their overall success:

“The high approval rate in this category of lenders is a reflection of their strong investment in technology advancements, which enables them to quickly assess the risk of default. Thus, they are incredibly efficient; only a miniscule 0.77 percent of loans made by institutional lenders on our platform have defaulted.”

But also apparent from Biz2Credit’s data over time, small businesses are not finding similar fortunes at small banks.

Once again, small banks were declining more than half the loan applications they received from small businesses in February. That is the fourth consecutive month that this rate has dropped below 50 percent.

Last month, smaller banks approved 49.6 percent of the loan applications they received. That’s level with January’s figure but Biz2Credit notes that this rate has been in decline since May 2014.