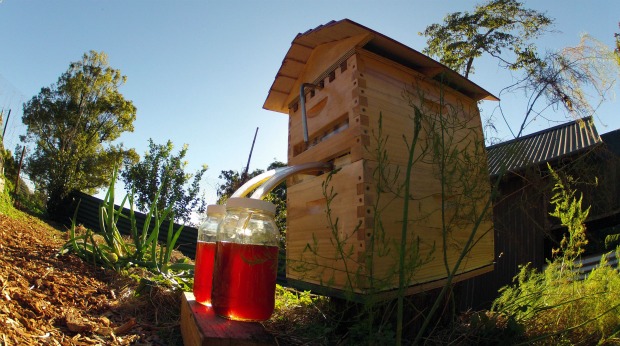 Consuming honey may be an enjoyable activity, but gathering it certainly isn’t. Extracting honey from beehives has traditionally been a complicated and sometimes dangerous process.

But now an Australian beekeeper and his son are aiming to change that process. Their product is called Flow Hive. The device dispenses honey from a tap, similar to how syrup is extracted from maple trees. It is a process that is meant to make the process of harvesting honey easier for beekeepers as well as less intrusive for the bees themselves. The product’s Indiegogo page states:

“We are excited to introduce our new invention that allows you to enjoy fresh honey straight out of your beehive without opening it. It’s far less stress for the bees and much, much easier for the beekeeper.”

The father-son team of Cedar and Stuart Anderson have been working for years to develop the product. Stuart Anderson told The Huffington Post that the product is the result of a “decade-long task of inventing the beekeepers dream.”

The team is currently running an Indiegogo campaign to fund the invention. The campaign doesn’t end until April 5, but it has already raised more than $4 million over its $70,000 goal.

There are a few different products that interested parties can order. Some include an entire frame and everything a beekeeper might need to harvest honey (minus the bees). And others just include a few frames that make the honey harvesting process easier for existing beekeepers who already have active hives.

But none of the products will change the other aspects of beekeeping. Though they certainly will have an impact on harvesting honey, beekeepers still need to use care when handling their hives during other activities like swarm control. The product doesn’t eliminate the need for things like bee suits and hive tools. And the Andersons still recommend that new beekeepers seek guidance from experienced ones or established beekeeping groups.

But with so much money raised already, it’s clear that people see a need for this type of product. Harvesting honey is a huge part of beekeeping that used to require a lot of work and extra caution. But this father-son team seems to have come up with a great innovation to make that all a lot easier. And beekeeper and other interested parties have responded.