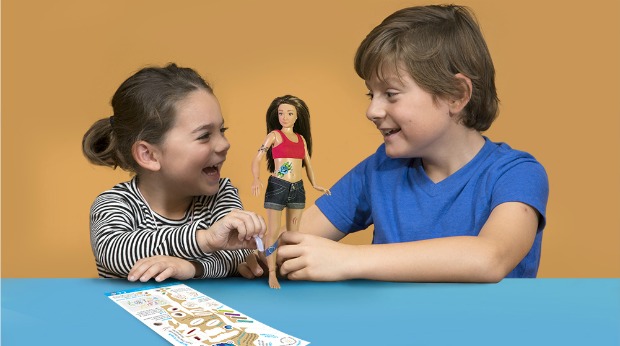 When developing a new product, you likely want it to be as close to perfect as possible. But that might not be the right goal for every business, as evidenced by Lammily.

The doll company creates dolls similar to Barbie. But these dolls come with stickers that depict imperfections like acne, stretch marks, and mosquito bites.

And despite those imperfections, kids still seem to love Lammily dolls. The company’s founder, Nickolay Lamm presented the dolls, which also feature proportions similar to the average American 19-year-old, to second graders at St. Edmund’s Academy in Pittsburgh.

Their reactions are gathered in the video below. But overall, the kids did not seem to mind the dolls’ imperfections. In fact, most seemed to see it as a positive.

One child said about the unique nature of Lammily dolls:

“If you all look the same it would be hard to tell people apart.”

In addition, children seemed excited about using the stickers to change the way they would normally play with dolls. Of course, some would use their imaginations and artistic skills to create different characters for their Lammily dolls using the stickers. One child in the video said:

“If you want her to be old, I suggest you put the stretch marks on, because it kind of makes her look old.”

But other kids might be likely to use the stickers to make their Lammily dolls look just like them. Since kids are always getting scraped knees and grass stains on their elbows, having those options on a doll could even make them feel better about their own imperfections. One child suggested.

“Like, if I go somewhere and I fall, I can put whatever happened to me on her.”

The video’s creator also asked some seventh graders at the school about the idea behind the dolls. They seemed to think it would be beneficial for young children to learn early on that they don’t have to be perfect. One said:

“I think it’s better at a young age to learn it’s okay to have bruises or bumps or marks like that.”

It’s a concept that’s different than most other dolls out there. Children have so many different options when it comes to pretty dolls with fancy outfits.

But Lammily dolls and their stickers, however imperfect they may be, allow children to really customize their dolls and use their imaginations in a completely different way.