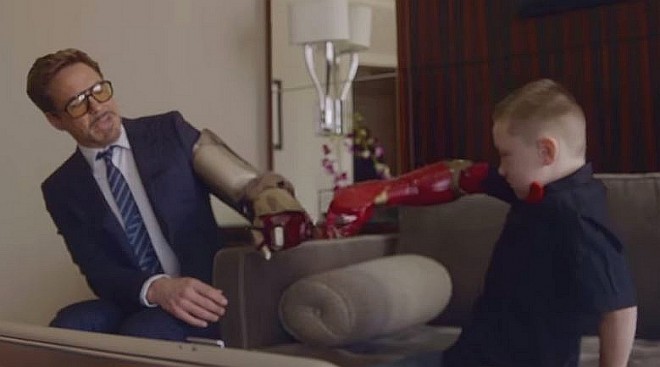 Many seven-year-old boys dream of becoming superheroes. That dream came pretty close to reality recently for Alex, a boy who was born with a partially developed arm.

The seven-year-old received a bionic 3D printed arm made to look like the arm of Iron Man and it was delivered by none other than Robert Downey Jr., who plays Tony Stark in the Iron Man movies. He stayed in character as Stark while meeting with Alex and he even tried on his own Iron Man arm to have some fun his new protégé.

Post by Robert Downey Jr.
The video, which was captured by Microsoft’s “The Collective Project,” shows the meeting between Downey Jr. and Alex, who proudly shows off his new bionic 3D printed arm.

This is just one of the ways that 3D printing is making a huge impact on the medical industry. Artificial limbs can be incredibly expensive and difficult to produce. So for kids like Alex, accessing these limbs can be difficult if not impossible.

But 3D printing allows people to design prosthetic limbs digitally and then the technology will take care of the rest. So the process can be a lot more cost effective, particularly when creating limbs for growing kids who will need new ones on a fairly regular basis.

That’s why organizations like Limbitless Solutions are working to make the whole process much easier and a whole lot less expensive for kids in need. And in this case, they even helped a kid feel like a superhero.