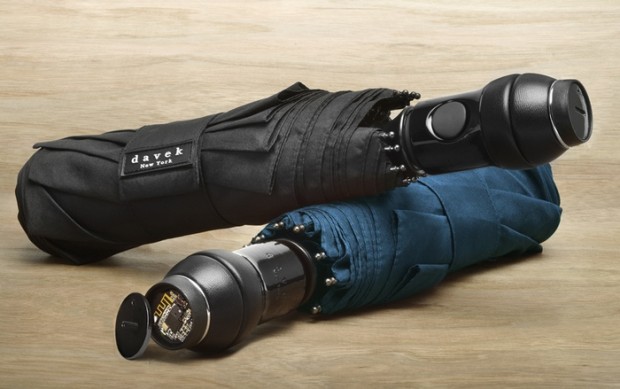 Dave Kahng is a mechanical engineer who noticed a problem with umbrellas: they are far too disposable. He felt that if a person didn’t lose their umbrella first then it would quickly break and become useless in just a few outings. So he set out to create a better umbrella. The result is Davek.

The company’s goal is to create products for consumers who would rather invest in one item of quality than cheaper options that will have to be quickly replaced. The company claims to have the strongest, most high-quality umbrellas on the market.

Now Davek has taken to Kickstarter to launch its newest umbrella, the Davek Alert.

For more information on Davek Alert, check out the Kickstarter campaign video below.

Davek Alert starts by being a well crafted umbrella. According to the campaign’s Kickstarter page, the frame is constructed with a combination of materials to supposedly create a balance between rigidity and flexibility. The microfiber canopy and one touch button handle are in keeping with Davek’s already established high standards.

But the most promising feature of this umbrella is the beacon tech that helps prevent loss.

A small Bluetooth based chip is hidden in the handle. This “proximity chip” syncs up to your smartphone with the use of an app. When you are on the go with your umbrella, it will stay connected to your smartphone and send you a message alerting you if it has been left behind. Hence the name Davek Alert.

The company says it’s like having an invisible leash on your umbrella. Walk about 30 feet away and your umbrella will let you know it’s not with you. It’s a convenient feature to have, if you’re spending this kind of money.

“Our love of design and devotion to craftsmanship is embedded within each umbrella that comes off our production line. Beacon technology is very new stuff, but some ideas are just too cool and timely to resist early development. This is one of them. It takes a useful, yet underappreciated device — an umbrella — and brings it into the realm of the internet, allowing you to interact with it, and it to you.”

It’s an intriguing idea. With this beacon technology, Davek is looking to include loss prevention into its line of luxury umbrellas. Davek already has experience in designing and producing their high end products. If anything, Kickstarter is a way for the company to promote their newest model.