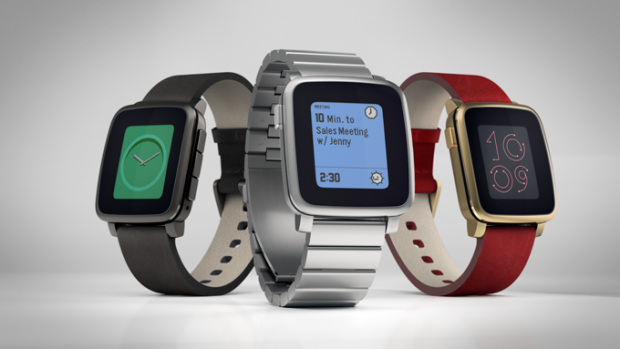 Pebble is back with a vengeance. The company has returned to Kickstarter to launch its new smart watch, the Pebble Time, and has become the most funded Kickstarter to date. The company blasted through its original goal raising over $17 million to date, and the campaign still has a little over two weeks to go.

Check out this video from the new Pebble Time campaign:

This is not the first time Pebble has broken Kickstarter records. In 2012 the company ran a campaign to launch its first Pebble watch. This campaign would snag them $10 million and remains the third most funded Kickstarter to date.

The question is then, why would Pebble need to crowdfund this time? Pebble has stated on its campaign page:

This is where it all started. Three years ago you supported our vision to make the world’s first real smartwatch. The Kickstarter community and our early adopters believed in us before anyone else even knew we existed. You blew us away with your support and kicked off a worldwide movement! Your overwhelming support and feedback has shaped what Pebble is today. We’re back on Kickstarter to give you – the community who cares the most – an opportunity to support our vision for wearables and get exclusive access to our newest product.

Pebble claims the new Time smartwatch will include many features customers enjoyed in the original. Always-on, daylight readable screen, water resistance, and tactile buttons among other features. But the Time will be coming with some upgrades as well.

The Pebble Time will feature a new color e-paper display. Pebble claims this new display minimizes power consumption while being well lit, easy to read, and in color.

Also included in the new design is a microphone allowing users to send voice replies to incoming notifications. Users can also use the microphone to make short voice notes. This new microphone is said to work with most major Android apps like SMS, Hangouts, and Facebook Messenger. However, as of now, iOS users will be limited to Gmail notifications.

The biggest change will be a new timeline interface. Pebble claims it found apps to be be an ineffective way to interact with a smartwatch. Instead the company’s new interface will display notifications, news, reminders, and events chronologically like a timeline. Hence, the name, Pebble Time.

Pebble’s new smartwatch is available in two models. Pebble Time is the standard model and comes in three colors; black, white, and red. If you are interested in a high-end look there is the Pebble Time Steel. There are three stainless steel finish options: silver, gunmetal, and gold.

Shipping is slated to begin in May. Right now you can preorder a Pebble Time on Kickstarter for $179. Pebble says that the regular retail price will be $199. The Pebble Time Steel is available through the Kickstarter campaign for $250. Pebble has also created a distributor tier for those looking to sell its devices at the retail level.