Read “Captivology” And Learn How to Grab Your Customers Attention 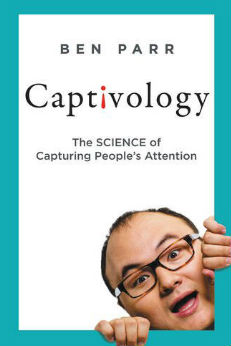 How many times do you get distracted during the day?

I can tell you that I sat down to write this particular book review at least three times. I would write a sentence or two and something would grab my attention as being more important than the next sentence.

In fact, I just stopped writing in mid-sentence to clean up a breakfast mess I was looking at from my desk.

Then, there are your customers. If you are this distracted, what about them?

Of course, they are distracted by the same things that distract you. These days, it’s the human condition.

Captivology Gives You a Blueprint for Grabbing Attention.

It’s this dance between attention/distraction that has captured our imagination like no other topic in the 21st Century, as evidenced by the success of books like “Made to Stick”, “Enchantment”, “Hooked”, “Fascinate” and many others.

If you’re a fan of these books, then lean in, because I’ve got some killer brain candy for you called “Captivology: The Science of Capturing People’s Attention” by Ben Parr (@BenParr).

Parr is an award winning journalist, entrepreneur, investor, and expert on attention. He was the co-editor and editor-at-large at Mashable and served as a columnist for CNET. Parr was named one of the top 10 tech journalist in the world by Say Media and named to the Forbes 30 under 30.

Personally, I love books written by journalists because of their unique ability to do ridiculous amounts of research and craft their learning into content that is not only educational and informative, but fun to read.

“Captivology” is exactly that kind of book, fun, entertaining, educational and actually filled with practical ideas that you can use in your own quest to grab your customer’s attention in an ever-crowded, information-overload world.

Discover the Science Behind When we Pay Attention, When we Tune Out, and Why

Parr dedicated several years of research into 500 studies on attention psychology and neurology to write this book. He interviewed more than 50 PhDs, researchers, and thought leaders, including Sheryl Sandberg of Facebook, film director Steven Soderbergh, and illusionist David Copperfield.

As a result, he categorizes attention into three distinct types: immediate, short and long attention. Then he takes this a step further and lays out seven triggers that grab attention and how to use them. Here is a short summary of each one:

How to Use “Captivology” to Get What You Want – NOW

One of my favorite examples in the book is in the Reputation Trigger chapter. Parr gives some specific advice to journalists and public relations professionals about how to get the word out about their company and product. He writes:

“It’s no surprise that, when most startups pitch journalist to write about their businesses, they get no response. It’s because inexperienced entrepreneurs tend to do one, some, or all of the following:

Each trigger chapter in the book has practical advice like this. In fact, I’ve dog-eared several of them and I know you’re going to as well.

Add “Captivology” to Your Library If …”

If you are a marketer, salesperson, small business owner, or even if you are in the non-profit area, “Captivology” needs to be on your nightstand and in your library.

If you already own books like “Made to Stick” or Guy Kawasak’s “Enchantment” you won’t be able to resist “Captivology”. In fact, with graduation season coming up, “Captivology” is a great gift for the new graduate who is looking to stand out in a competitive job market.