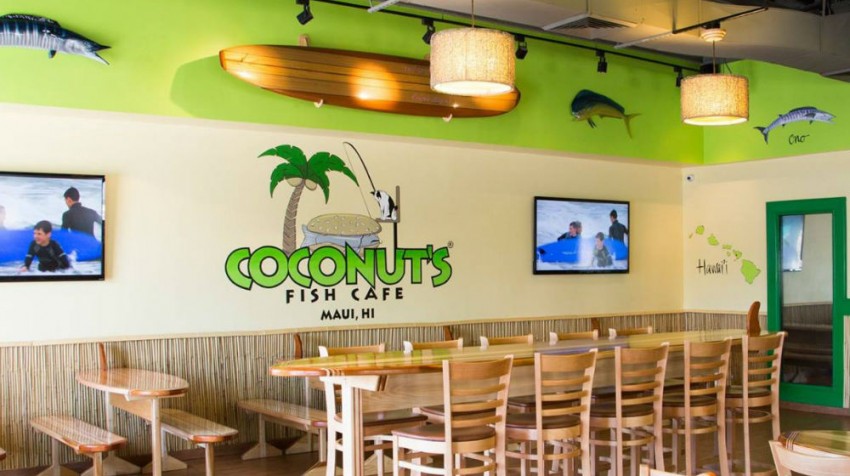 Entrepreneur and cat lover Michael Phillips decided to return to the business world with his latest restaurant franchise … after retiring to paradise.

Phillips founded Coconut’s Fish Café in Khei, Hawai’i, on the island of Maui, opening the doors of the flagship restaurant in 2009.

Named after the family cat, Coconut, the eatery has been named number one in the city five years in a row. Phillips’ ah-ha moment came when he realized how expensive fish was at surrounding restaurants, and decided there was a niche to be filled.

In an interview with Business Opportunities, Phillips explains:

“While I always enjoy going out and spoiling people with fancy, formal dinners, I love being able to go and enjoy top-quality foods in a more casual environment. That’s one of the things that we’ve focused on at Coconut’s, embracing a fast-casual, chef-driven experience. And because people have embraced us, we’re now able to bring Aloha and a piece of our Maui home to cities across the country.”

Thanks to the quality of service and food, the restaurant has become so popular that Phillips says on a typical day they serve about 600 guests. Today, there are four locations located in Maui, Dallas and Plano, Texas, and Scottsdale, Arizona. And if things go according to plan, Phillips plans to open 100 franchise sites throughout California.

Phillips was no newcomer to the restaurant business when he stared Coconut’s Fish Cafe. During the 1980s he had owned and operated a chain of pizza restaurants.

Then, after turning 40, Phillips decided to retire early, sold his business and moved to Maui. But there, the same entrepreneurial spirit that had driven him in his earlier career began tugging at him again.  In Maui, Phillips noticed the price of a fish dinner could push upwards of $50 to $60. At Coconut Fish Café, customers can get the same fresh cuts of fish or about $12. But more than just low price, Phillips says he’s worked to put the focus on fresh, quality ingredients and customer service.

The menu includes what the restaurant claims is already its ‘famous’ fish tacos. There are also fish burgers with three types of fish, and a variety of classic Hawaiian dishes. Certainly the food, which Phillips describes as fresh and made from scratch, is a huge part of the restaurant’s success.

But there’s one other place Phillips admits the restaurant works very hard to set itself apart. And that is in the very casual and Hawaiian atmosphere the restaurant attempts to create. Although the atmosphere is casual, the good is all healthy and made from scratch daily.

“Once you open the door, you enter the aloha spirit, with surf movies on the TVs, custom furniture made from surfboards — a special environment.”