The Rise in Variable Compensation in Small Businesses 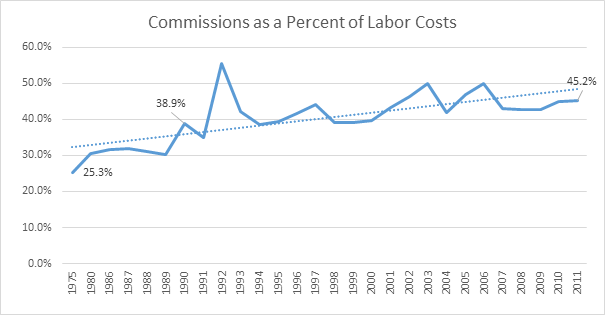 Small businesses have changed how they compensate employees over the past 40 years. That’s not surprising given all the changes in the economy and society that have occurred since the mid-1980s.

I have written about many of these shifts before:

In my previous columns, I haven’t commented on another long-run trend in small business employee compensation, the rising use of variable compensation.

Internal Revenue Service (IRS) data on the roughly three-quarters of U.S. businesses that operate as sole proprietorships shows that commissions account for a higher percentage of labor costs now than they used to, making up 45.2 percent of those labor costs in 2011, the latest year data are available, as compared with 25.3 percent in 1975.

The shift to commissions occurred primarily in the late 1980s and early 1990s, as the figure above shows. The fraction of sole proprietors’ labor costs that take the form of commissions has fluctuated between the 40 and 50 percent mark since the mid-1990s and is currently well below the peak of 55.5 percent achieved in 1992.

Image source: Created from data from the Internal Revenue Service