Running a Contest? Here’s How to Get More Entries 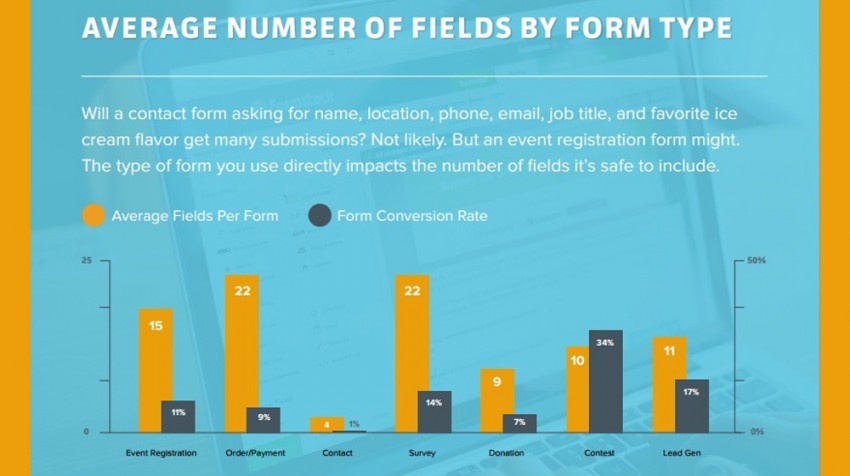 Running a contest is a tried and true marketing method to build an email list. But it can be frustrating if you don’t get many entries.

A recent study reveals how to get more participation.

The study by Formstack, an online form builder tool,  found that contest forms had the highest “conversion rate” of all forms.

In other words, a higher percentage of people completed contest forms than other types of forms. That old “what’s in it for me” is alive and well, obviously. The incentive of a chance to win something is a major motivator.

Even so, only 35 percent completed the contest form all the way through.

But that’s par for the course for forms in general. In fact, contests had a much higher percentage of completions than other kinds of forms, as the above graphic shows. (Click for larger image in new window.)

Compare a “Contact” form. A minuscule one percent of Contact forms are actually filled out and submitted!

So if you are concerned by what feels like a low completion rate for your form, you may not be doing any worse than your peers. In fact, you could be doing better.

Eva McKnight, team lead and project manager for the Formstack study, in a phone interview with Small Business Trends emphasized not to be discouraged. There are a number of ways to increase the amount of entries when running a contest:

Instead of requiring people to fill in data such as their email address and name — give them a button to fill parts of the form using their Facebook credentials.

Per the study, there was a whopping 189 percent increase in conversions when users were given the option to automatically fill in data from a social media profile. It really is true — people like “easy.”

Contests already have a high conversion rate to begin with, and autofill increases conversions, added McKnight.  “I think you could surmise that’s because contests are fun and people like to do them. And offering the social media autofill option resulted in a much higher level of conversion than requiring email credentials,” she noted.

Conversion rates for filling out contest forms more than double when you embed the contest form on your Facebook page.

McKnight noted it’s important to make sure you are first complying with Facebook’s terms when running a contest.

She said that Formstack’s Facebook Tab Embed feature is compliant with Facebook’s data capture regulations.  But she added. “We always encourage our users to review guidelines for Facebook, as well as prepare a Terms and Conditions statement, for any contest.”

3) Limit the Number of Fields

The average number of fields for a contest entry form is 10.

That may seem like a lot, but by the time you include name, email, address and whatever else is necessary for entering the contest, it’s really not. Just remember, don’t make it hard on people.

Consider: does it seem too long when the person is filling it out?

How do you do that? Some form best-practices make sense:

Finally, McKnight offered this important piece of advice about timing for alerting people to the contest and encouraging entries.

“Remember peak submission times. Most conversion rates peak before 5 p.m. But by contrast, when running a contest the peak seems to be later at around 8 p.m.,” she said.

“It’s the end of the day. People are checking their email. They don’t have anything else to do. They are winding down. Other forms like donations and questionnaires tend to be work related, so they fall between those peak work hours. But contests are a fun activity and so something people often wait until after work to do,” McKnight added.

The study is based on data from 650,000 form users of Formstack. All data was treated anonymously for the study.

The full report can be found here.