Small Business May Be Less Innovative Than You Think 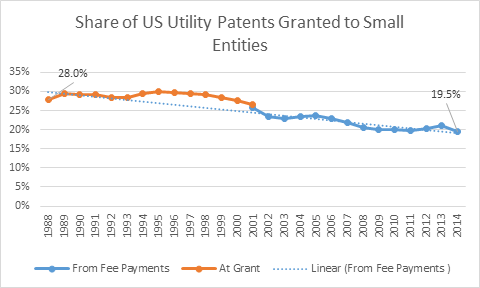 Many observers have argued that small businesses are more innovative than large companies because they are more nimble and because they offer greater incentives for people to take risks and be creative. The U.S. Small Business Administration (SBA), for example, points out companies with fewer than 500 employees produce more patented inventions per capita than companies with 500 or more employees.

But recent data produced by the United States Patent and Trademark Office (USPTO) and the National Science Foundation (NSF) suggest that small businesses are weaker at innovation than many observers have historically argued.

Small business accounts for a small, and declining, fraction of U.S. inventions. As the figure above shows, small businesses received fewer than one-in-five U.S. patents in 2014. Moreover, as the dotted line in the figure suggests, the share of U.S. utility patents granted to small entities appears to be trending downward, slipping from 28 percent in 1998 to 19.5 percent in 2014.

Small businesses have an inferior yield on their patent applications than large businesses. Not all patent applications result in issued patents, and small businesses have a far worse yield than their larger counterparts, National Science Foundation (NSF) data suggest. The most recent (NSF) Business R&D and Innovation Survey (BRDIS), an annual survey which queries approximately 45,000 public and private for-profit enterprises about their innovative activities, found that only 49.3 percent of applications from companies with fewer than 500 employees resulted in granted patents, as opposed to 73.4 percent for businesses with at least 500 workers.

Small businesses provide only a small fraction of high technology sales. While the SBA reports that companies with fewer than 500 workers generated 38.3 percent of all private sector sales in 2011, the NSF’s numbers show that small companies accounted for only 12.5 percent of the domestic sales of companies located in the United States that performed or funded R&D.

Bigger businesses invest more heavily in innovation than their smaller counterparts. The NSF’s numbers show that companies with fewer than 500 workers accounted for only 19.3 percent of domestic R&D spending. On a per capita basis, big business’s investment in R&D is also higher. Companies with 500 or more employees conducted $202,000 worth of R&D per R&D employee in 2011 (the most recent year data are available), as compared to only $115,000, for companies with fewer than 500 workers.

Small companies are underrepresented as employers of high tech workers. While SBA data show that small businesses accounted for 48.5 of all domestic private sector employment in 2011, NSF data reveal that businesses with fewer than 500 workers were responsible for only 32.7 percent of domestic private sector R&D employment, the BRDIS survey reveals.

Image Source: Created from data from the U.S. Patent and Trademark Office