Bitmoji Offers Emoji Characters That Look Just Like You 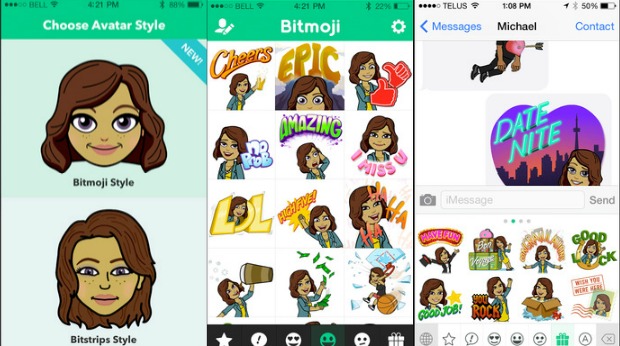 iPhone owners got an unexpected surprise in the latest iOS update — some new emoji. The new characters include some more diverse faces. But there still aren’t enough different characters to really match the look and style of each person who uses them.

That’s where Bitmoji comes in.

The keyboard app, which was created by online comic startup Bitstrips, allows users to create their own emoji avatars in their likeness. Then they can use them in text messages and apps on Apple or Android devices. Users can customize their avatars with features like hairstyles, outfits and even makeup colors. Or they can simply import an existing Bitstrips avatar. Those avatars then appear in different emoji styles, including smiles, frowns, heart eyes and more.

“Texting is making conversation more convenient than ever, but it’s also stripped away a lot of the things that make communication human. We think one of the most important things that’s still missing is identity. If you think about history, 99 percent of human communication has been face-to-face.”

So while texting with Bitmoji isn’t quite the same as face-to-face communication, it’s one step closer. If someone sends an emoji that actually sort of looks like them, it could have more of an impact than just a generic emoji character.

Besides, people always seem to love customizing things. From monogramming towels to creating lifelike avatars for video games, if there’s a way for users to make something a little more unique and personal, they tend to take advantage of it. So, Bitmoji is clearly a product that appeals to that desire for customization.

Another benefit of the Bitmoji system is its ability to be constantly updated. Those who use the regular iPhone emoji characters have been waiting for years for a new set of emoji. And who knows how long it will be until the next update? But Bitmoji can launch updates about once a week, so users constantly get new personalized characters to use in their text conversations. The Bitmoji team have even integrated some pop culture references into the characters. So timeliness is key for those elements.