Dungeons and Drafts is a New Bar Just for Geeks 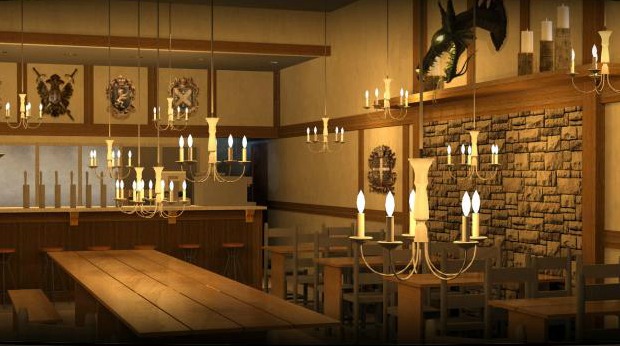 There’s no shortage of bars out there where customers can go and enjoy a beer while watching some football with friends. But what about those who want to enjoy a different type of game and different kind of company?

Dungeons and Dragons is a fantasy tabletop role playing game that has been around since the mid-1970s. Its fan base might not be as large as that of most professional sports, but it does have a relatively large and loyal following.

Up until recently, the one thing the Dungeons and Dragons community lacked was a dedicated bar or restaurant of its own. Enthusiasts needed a place where they could go and hang out with others who share their geeky interests. Maybe it could even be a place to enjoy a game or two.

Finally, it seems, that need has been filled.

A group of geeky entrepreneurs recently came up with the idea to start a Dungeons and Dragons themed bar in Fort Collins, Colorado. The bar, which is appropriately named Dungeons and Drafts, will feature a variety of themed foods and beverages, including cocktails called “Thyme Lord” and “Waters Rise.” Other selections will include food dishes with an old world feel like Bangers and Mash and Shepherd’s Pie.

“For too long geeks have had to endure noisy sports bars and venues without readily accessible polyhedral dice just to have a drink with friends. Well, no more! Dungeons & Drafts is here to provide geeks from all walks of life with a welcoming place to call their own, kick back with a pint, and play a game with friends.”

The new bar is the brainchild of Melissa and Manny Garza, Beren Sakala and Kevin Finney. The team launched its Kickstarter campaign in late February and reached its goal in less than seven hours. Upon completion of the campaign, Dungeons and Drafts raised $57,772. Its initial goal was just $9,600.

That success is absolutely a product of the unique nature of the bar. Bars aren’t exclusively enjoyed by sports fans. But until this point, there weren’t a lot of other options for people with other interests. This group of entrepreneurs saw a hole in the market and built a product specifically for an underserved group.

It might be a pretty niche type of business but it clearly has enough of a fanbase to fund its project many times over. And that type of innovative thinking can definitely grab a lot of people’s attention.