Etsy Balances Needs of Sellers, Stockholders as IPO Gets Under Way 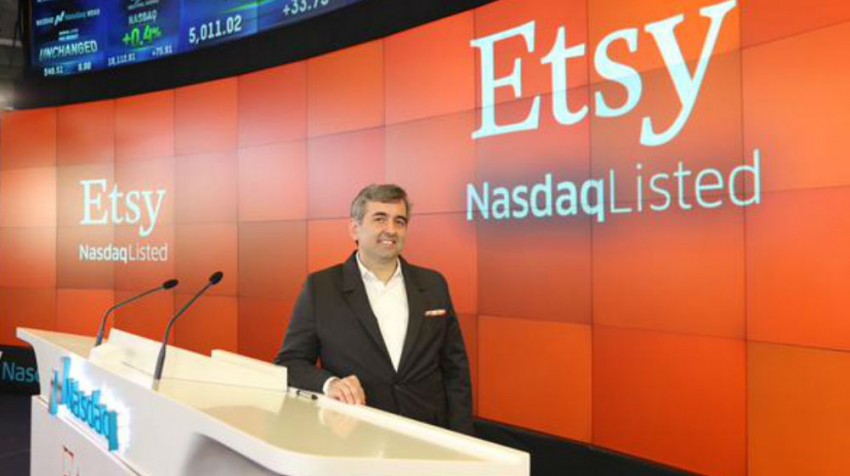 The site where you can get a tiny crocheted Maltese puppy, a glowing turquoise owl necklace, and a 3D paper taxidermy lion can now be yours.

Well, at least part of it.

Etsy, headed by CEO Chad Dickerson (pictured above), went public today April 16. Shares of the company are being offered for $16 each as part of Etsy’s Initial Public Offering (IPO).

The IPO is expected to last until April 21.

A company announcement (PDF) says that 16,666,666 shares of Etsy common stock are available. The company will be selling 13,333,333 shares while existing stockholders are selling the remainder. Etsy does not receive any money from the sale of stock by stockholders, just its own shares.

ZdNet reports that based on Etsy’s initial pricing, the company has a valuation of $1.8 billion. The company reported $195.6 million in revenue in 2014.

Etsy will be traded on the Nasdaq Global Select Market under the symbol ETSY.

Goldman, Sachs & Co. and Morgan Stanley & Co. LLC are acting as joint book-running managers for the offering. Allen & Company LLC, Loop Capital Markets LLC and The Williams Capital Group, L.P. are acting as co-managers, according to a company release.

This IPO has been met with particular skepticism since it was first announced a few months ago.

In its Securities and Exchange Commission filings, the company further discloses:

“We may not achieve or maintain profitability in the future. We expect that our operating expenses will increase substantially as we hire additional employees, increase our marketing efforts, expand our operations and continue to invest in the development of our platform, including new services and features for our members. These efforts may be more costly than we expect and our revenue may not increase sufficiently to offset these additional expenses. In addition, as a public company, we will incur significant legal, accounting and other expenses that we did not incur as a private company.”

A report from MarketWatch suggests that two factors may prevent Etsy from being profitable longterm.

First, it’s the largest B-Corp company to go through an IPO. B-Corp companies must meet certain criteria — social and environmental responsibilities among them — as judged by the B Lab, a non-profit company that gives out B-Corp certifications.

Meeting these criteria can be costly and cut into any potential profits. And as Etsy continues to grow, costs associated with maintaining B-Corp status will continue to grow, too.

Secondly, Etsy has made a commitment to its sellers. After all, without sellers and the fees they pay on each completed transaction, Etsy wouldn’t make any money.

To stay dedicated to the seller first (in this case, the stakeholder) over the shareholder, the company will have to keep those fees low.

Further, Etsy sellers have become concerned in recent years with rule changes to the community’s guidelines that would seem to allow so-called “resellers” of mass produced products on the site.

In 2013, the company again opted for policy changes it hoped would appease its large handmade community while at the same time allowing it to broaden its user-base by accommodating more kinds of sellers.

The new policy seemed to continue to allow the sale of products created by outsourced labor so long as sellers were transparent about the process.

“Hire help if you need it or collaborate, even from different locations. Everyone who helps you make handmade items should be listed on your shop’s About page.”

It went on to say:

“Sellers create their handmade items in many different ways. Partnering with an outside business is okay, but we’ll require you to be honest about how your items are made.”

It has been a rapid rise for Etsy. The company was started in 2005 in Brooklyn, New York. And its site was designed as a platform for makers of handmade goods specifically, to sell their products. At last count, the site has 1.4 million active sellers. Etsy says there are 19.8 million active buyers, too.