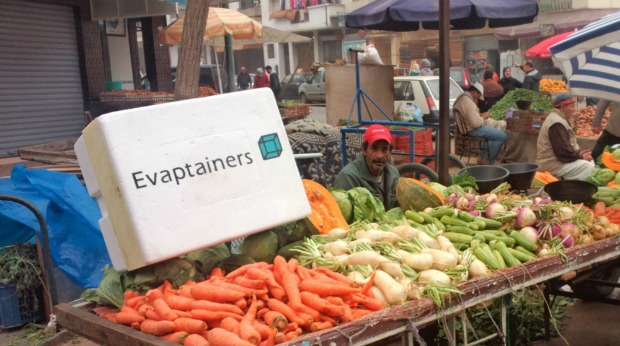 Is your refrigerator running? If so, it probably runs on electricity.

But if you own an Evaptainer, then electricity isn’t necessary. The small refrigeration devices actually keep food cool just using sun and water.

Evaptainers was founded by Spencer Taylor and Quang Truong. Truong had seen the problems with food spoilage around the world, first-hand. They thought it might be a good need to address. In developing countries especially, spoiled food is a big issue. Small farms can lose huge amounts of money due to food going bad. But using electricity to keep all of that food fresh isn’t always financially viable. Taylor told CNN:

“A lot of NGOs have given refrigerators to farmers, who say thank you, and then they come back three months later and they’re using it as a shelf.”

So Evaptainers provide a more cost-effective solution for those small farmers. The devices look like large coolers and use aluminum plates to draw out heat. They then use a special fabric and evaporative cooling methods to keep the inside cool. The devices require 6 liters of water to work for about 12 hours. That water is a much smaller investment than the electricity a normal refrigeration unit would require. Taylor said:

“If you are growing vegetables, you have an access point to water and are already invested in watering and growing a crop. It’s a very small additional investment.”

Though the Boston based Evaptainers is a for-profit company, its founders haven’t begun paying themselves yet. But they’re committed to the mission of eliminating food spoilage and helping small farmers. They’ve invested about $20,000 into the company and have no outside investors thus far.

The device is currently a prototype. But the company just started rolling out a pilot program in Morocco, where food spoilage is a particularly big issue.  Taylor and Truong have also partnered with a farming cooperative so the independent farmers don’t have to actually pay for the coolers, which cost between $10 and $20.