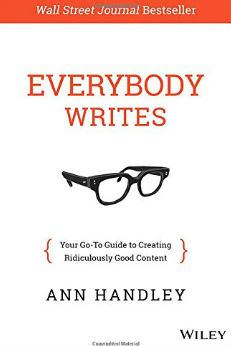 Here’s why the book “Everybody Writes” matters:

That’s author Ann Handley in the introduction of her book “Everybody Writes: Your Go-To Guide to Creating Ridiculously Good Content“.

And I say she’s completely right about that. Your writing in email matters; it makes you look good or not, like the quote above says. Your spelling and basic grammar on Facebook, even Twitter, and of course your company’s content in blogs and its website, that matters too. How you write matters to you.

I’m afraid that when I tell you what it covers, it will sound boring.

“Everybody Writes” covers it all, from grammar and spelling, to storytelling, content marketing, structure and proofreading, plus a lot of up-to-the-minute lists and tips such as lists of useful apps for writing, editing, and publishing. It dives into specifics on what works with blogging, such as how to identify topics and how to deal with titles and publishing.

“Everybody Writes,” however, is fun and not boring at all. It flows really well and is easy to start reading from any point. For an example, I didn’t choose this specifically, just picked it up browsing, from a chapter called ‘Embrace the Ugly First Draft:’

“In Greek mythology, the goddess Athena was the favorite daughter of Zeus. She was born not in the usual way; rather, she emerged from his forehead fully grown and armed. Much of writing paralysis is the result of expecting too much of ourselves the first time out. Sowing letters onto the blank page and expecting something strong and powerful and fully formed — the content version of Athena — to emerge is unrealistic. Unless you are some kind of deity, that’s not going to happen. Very often, the people you think of as good writers are terrible writers on their first drafts. But here’s their secret: They are excellent editors of their own work.”

And I love this list.  These 17 suggestions are straight from a chapter called “Avoid These Mistakes Marketers Make:”

I’d also include Ann’s list of five grammar rules you are welcome to break. Here’s one of the five (one that breaks two of the five):

“Never write a paragraph that’s a mere one sentence long. In school, I was taught to write paragraphs with no fewer than three sentences and no more than seven.

Modern marketing has pretty much choked this one dead because white space helps online readability tremendously.

But it bears emphasizing: one sentence, set apart, is a great way to make an important point crystal clear.

Ann Handley knows her stuff for sure. She’s the driving force (Chief Content Officer) behind Marketing Profs, an excellent resource for modern-day marketing with an emphasis on content. She also knows and loves writing, which I discovered a few years ago when I stumbled on her personal blog.

If you are a business owner, or any kind of knowledge worker — entrepreneur or not, business owner or not, employee or not — “Everybody Writes” is a book you’ll breeze through and you’ll be glad you did. And if you get it, so will anybody who reads what you write. This article was based on a copy provided for review. You can find out more about Ann by following her on Twitter @MarketingProfs.