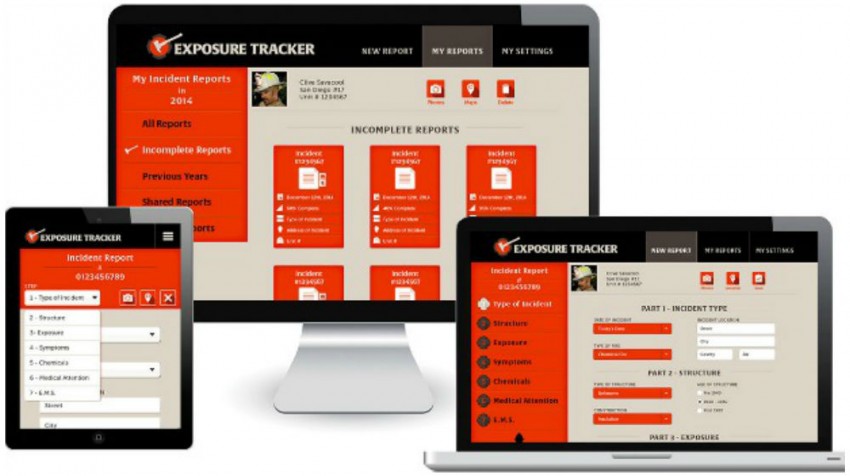 Clive Savacool has dealt with those dangers firsthand. In March 2014, he collapsed after battling a grass fire in Pittsburg, California. He spent the next few days in a hospital, where doctors concluded that he had a career-ending lung disease that was the result of cumulative toxic exposures during his 18 years of service.

But while his career as a firefighter was over, he wasn’t done trying to help people. This February, Savacool launched the Exposure Tracker app, a new cloud-based tool that allows firefighters to document their exposure to toxins, communicable diseases and injuries through their careers.

Savacool’s ultimate goal is simple. He told The Huffington Post:

“My long-term goal is to make a big dent in firefighter death statistics.”

So while some startups have worked to limit the risk for firefighters in immediate danger, this one focuses more on the long-term effects of fighting fires. And those dangers can be very real. firefighting often means being exposed to burning chemicals and their byproducts. Those risks have been linked to higher rates of cancer and other chronic diseases among both active and retired firefighters.

And it hasn’t gotten any easier in recent years. Roberto Padilla, spokesman for the Sacramento Fire Department, told the Huffington Post:

“Obviously, with how things are built and constructed now, the way it burns and the chemicals released from today’s fires are a lot more toxic than in years past.”

Some legislators and health experts are working to combat some of those potentially unnecessary and hazardous materials, both by banning certain materials and by working to obtain backup gear so that used gear can be decontaminated.

But for now, the Exposure Tracker app is at least working to keep firefighters aware of their own health and potential risks. The app asks questions about the types of fires and structures firefighters have been exposed to, the firefighter’s activity during and after the fire, and other behaviors. The hope is to both track potential health risks and educate firefighters about safety and best practices.

Savacool and his co-founder, Chris Memmott plan to roll out an iOS Exposure Tracker app within the next few month and also integrate it into wearable air monitoring devices later this year. The program won’t actually diagnose any ailments or list chemicals that firefighters may have been exposed to. But over time, the founders hope the app will help firefighters make educated guesses about their risk factors and learn how to become healthier.