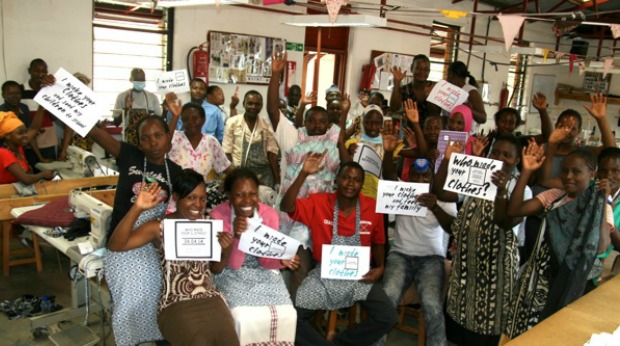 There’s a revolution happening within the fashion industry. And big brands and high-profile designers aren’t the ones leading the way. Instead it’s a series of startups and independent designers with quality, sustainably, and ethical manufacturing on their minds.

Fashion Revolution Day, which started last year, is a special day set aside for these goals. Designers Carry Somers and Orsola de Castro started the initiative, which encourages consumers to ask their favorite clothing brands one simple question: “Who made my clothes?”

It shouldn’t be a complicated question. But some of the big players in the fashion industry don’t always utilize the most ethical and eco-friendly manufacturing processes. Maxine Bédat, co-founder of New York City-based ethical eCommerce brand Zady, told Entrepreneur:

“It’s re-educating our generation because we grew up with fast fashion and we’re all exhausted by it.”

Fast fashion, which is the cornerstone of many major fashion brands, relies on quick, cheap manufacturing methods. That makes it possible to offer trendy, runway-inspired styles at extremely low prices. But it doesn’t come without some drawbacks.

In fact, the movement was originally launched to honor the anniversary of a factory collapse in Bangladesh, where 1,133 people were killed and about 2,500 more were injured. The factory created fabrics that were used by some large retailers including JC Penney, Zara and Children’s Place.

But because so many of those large brands use such extensive supply chains to source their materials, they don’t always even know where all of their materials come from. The Fashion Revolution wants to change that and create more transparency in the industry.

For some fashion brands, this type of movement could force some changes. But that would require a lot of consumers to get involved and demand more ethical and sustainable manufacturing practices.

For brands like Zady, which source materials and items from independent makers and other ethical sources, the movement could call some attention to them from consumers who are concerned about where their fashion comes from.