The Fourneau Bread Oven Helps You Bake the Perfect Loaf 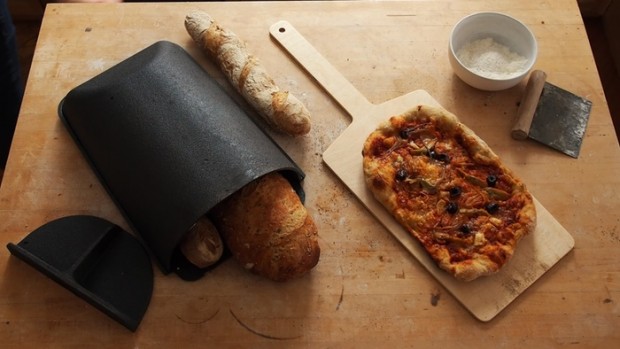 Ah, the joys of slicing into a freshly baked loaf of golden brown bread straight from your oven.

Baking artisan bread is an activity many home cooks and foodies enjoy. Design team Ted and Sharon Burdett share this passion for home baked bread but the duo started to wonder if there was a better way to make the perfect loaf.

The pair became frustrated when the tools available for home baking did not allow them the flexibility and creativity they desired. To overcome their own frustrations with home baking, the pair created the Fourneau Bread Oven.

Fourneau is a cast iron tool designed to fit into home ovens. It looks something like a tapered half dome with a door that can be pulled aside. The purpose of the door is to create an enclosed space to trap steam while baking. The Burdetts claim their design allows for multiple loaf shapes to fit inside, while the cast iron material allows for even high temperature baking.

The Burdetts founded Strand Design, a Chicago based studio with a dedication to sustainable and locally sourced materials for the products they create. In addition to their studio the pair also teach. Ted at the University of Illinois at Chicago, and Sharon at The School of The Art Institute of Chicago.

The Burdetts have continued their philosophy of local and sustainable manufacturing with the Fourneau Bread Oven. They have partnered with Illinois based toolmakers and foundries for their initial production run.

The Fourneau Bread Oven Kickstarter campaign is in its final days. The initial campaign goal was $90,000, but has earned over $127,000 in pledges. Early Birds, or in this case, Early Risers can snag a Fourneau for $175.

For more information on the Fourneau Bread Oven checkout the Kickstarter video below:

The Burdetts believe their creation will fill a gap in the market. They have stated on their Kickstarter page:

“While the super-heated container method for baking produces incredible results, it’s dangerous; After pretty much ruining our enameled dutch oven, we started looking for alternatives, and found that the right tool for the job just didn’t exist.”