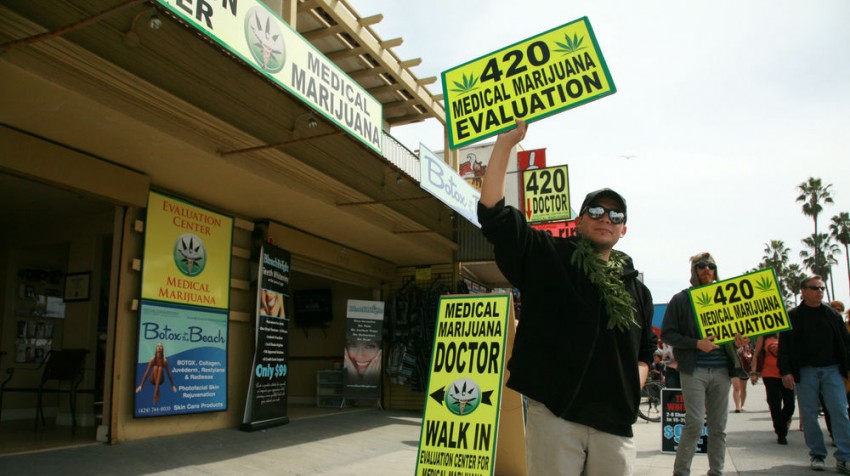 In emerging marijuana businesses both the opportunities and the risks are, pardon the pun, high. The same could be said for the industry’s startup potential.

And even though traditional banks are not getting behind the industry just yet, there are investors in the marijuana industry. But even if you decide to take on a backer in your marijuana-related business, it doesn’t diminish the myriad risks.

Medical Marijuana Already a Reality in Nearly Half the U.S.

Out in the Open

This rapid growth is giving credibility to the medical marijuana industry as a whole. And there is more startup potential than ever in that industry.

And now that use of medical marijuana is more widely legalized, the people behind these businesses needn’t hide from the public or rent low-budget, non-descript conference rooms in the middle of nowhere.

There’s actually an explosion of conferences for companies and entrepreneurs already working in legalized marijuana. And these are havens for entrepreneurs considering entrance into the industry, too.

If you’re interested in learning more about the variety of marijuana business opportunities, check our events calendar to see some listings of conferences in that niche.

When you attend one of the conferences, it’s best not to go in green. Generally speaking, this is not the pop culture version of the marijuana industry. This is serious business. To that end, here are some industry-related business terms to give you an idea. A full glossary of marijuana business and industry terms is provided by the Marijuana Investor News. Some of those terms include:

The number of companies involved in marijuana, recreational and medicinal uses combined, is growing. And the industry itself is growing, too. There is more legal money involved in the marijuana business than ever before in the U.S.

ArcView Group is an investor network but it also helps growth within the marijuana startup scene. According to Troy Dayton, ArcView’s CEO, the total legal cannabis market in 2014 grew to $2.7 billion, a 74 percent increase over the previous year.

And it’s likely these numbers will increase this year. Simply put, there are more people at liberty to contribute to the medical marijuana economy. Michael Zaytsev, co-founder of the High NY Meetup.com group is focused on empowering cannabis leaders through networking and knowledge. He says:

“There are countless opportunities in this industry for entrepreneurs — tourism, compliance, education, branding, software, hardware, biotech and more.”

Time To Grow Up

Puns and joking aside, the marijuana industry is legitimizing itself. And with that growth also comes a time of maturity.

Even if banks are refusing to back the industry — mainly because in the eyes of the federal government it’s considered illegal — private and public investors aren’t exactly shying away at the opportunity. There are even “hands off” investment opportunities where the actual marijuana plant is never handled, such as the MassRoots iPhone app, the information-sharing community that trades publicly on the OTCQB, an over-the-county securities market, under the symbol ‘MSRT’.

Here are some recent examples highlighting the growth and acceptance of the marijuana industry:

That type of investor is not looking for some garage grow room operation. They’re expecting a professionally-run and well-managed business as the recipients of their investment money. And in the face of this rapid growth, Viridian’s report warns that this year will see many more marijuana-related businesses fail because of this. Researchers said:

“The industry is undergoing a shakeout on a very fundamental basis due to the early stage nature of the industry and the lack of executive experience. Hype will not be enough to sustain companies in the eyes of investors and may contribute to action by regulators.

We will likely see a number of public cannabis companies fail this year. With increasing flows of ‘smart money’ will come increasing demand for companies to demonstrate top-tier management and sustainable business models.”

Of course, the one big risk involved with any business in the marijuana industry is the fact that marijuana is still illegal in the eyes of the federal government.

State laws and business licenses aside, marijuana is considered a Schedule 1 narcotic per the federal Controlled Substances Act. And there is no federal agency that will back its use for any medicinal purposes.

And as with any illegal industry, the legal landscape is fogged. It stands to reason that this area will remain a hot topic for the near future. Remember, use of marijuana for any purpose is still illegal in more than half of the U.S. So there are interstate commerce laws to consider on top of the federal.

Within the “canna-business” community, the risks involved are considered essential knowledge and emphasized because of the domino effects they can create. For example, traditional financing and even normal banking can get complicated because federal regulations preclude transactions involving “drug money.”

Proceed with caution and preferably with strong local and online communities to guide you.