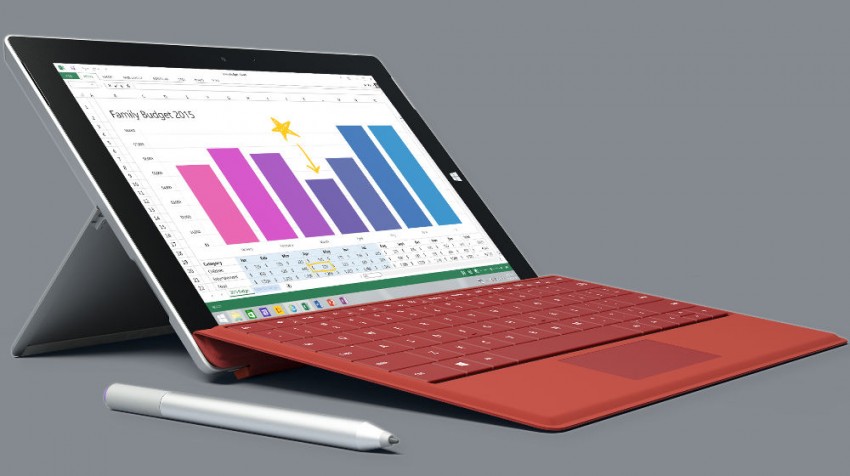 Has the laptop become passé?

Microsoft sure wants you to think that way with the introduction of the Surface 3. Like a lot of hybrid laptop-tablets and the companies behind them, they’re touted as a replacement, once and for all, for your conventional laptop.

Based purely on the technical specs on the new Microsoft Surface 3, this may be the closest yet to replacing a laptop altogether. That is, at least, among the choices of mid-range laptops.

The Surface 3 sports a 10.8-inch display. Of course, that’s a bit smaller than most laptops. If you or your company is on the move a lot or feels it doesn’t need that much screen to get the job done, then perhaps that’s not as important.

“If the majority of your work is less intense — working in Office, writing, using the Internet — then you’ll find that Surface 3 delivers everything you need.”

Microsoft Surface 3 is designed mostly as a tablet — a larger one, of course. It’s only 8.7mm thick and weighs less than 1.5 pounds.

The so-called laptop replacement even charges like a mobile device through a micro-USB connector. Microsoft says it’s including a 13W charger with the Surface 3 but if you’re in a pinch, a mobile phone or other tablet charger will do the trick, just not as fast.

One full charge is good enough for 10 hours of video playback, so getting through an entire workday seems feasible on a regular basis.

The device charges like a tablet but is somewhat bigger. It features a touch-screen with a stylus. So, could it be considered  a tablet with accessories that mimic the usability of a laptop?

Microsoft begs to differ. Check out this short video profiling the Microsoft Surface 3 as something more:

Surface 3 will ship with Windows 8.1 and Microsoft is including a free upgrade to Windows 10 when it becomes available.

To cater specifically to business users, Microsoft is also including a full year’s subscription to Office 365 — giving you full use of its suite of apps — and 1TB of cloud storage on OneDrive.

Based on a new report from Forbes, the inclusion of an Intel chipset (more on that below) with the Surface 3 essentially brings the much-maligned Windows RT to the end of its pothole-filled road.

All That and a Quad-Core Chip

Microsoft is also including the Intel Atom 7 quad-core processor with shipment of the Surface 3 to run the full version of Windows.

This processor doesn’t require a fan to be cooled.

Panay writes more on the “system on a chip” offering from Intel:

“It features a unique combination of burst mode and advanced power management — meaning it delivers performance when a given task requires it, but scales back to conserve power whenever possible.”

Turning Surface 3 into a full-functioning laptop can’t be done straight out of the box, though. It requires a few accessories that are available in addition to the main device.

The display portion of Surface 3 is built with a three-point kickstand. This allows the display to be freestanding.

A click-in Type Cover keyboard is available as an additional purchase. It doesn’t require any charging to operate. The display on the Surface 3 physically clicks into the keyboard and all that’s missing is a mouse.

The latest offerings from the Surface line from Microsoft now also have their own stylus, the Surface Pen.

Microsoft says that this stylus only works with the Microsoft Surface 3 and the larger and slightly more powerful Surface Pro 3.

It, too, is sold separately.

Surface 3 also has a docking station. By attaching the display portion to the docking station, users can attach any number of peripheral devices to its USB and other ports.

This includes a keyboard and mouse for laptop purists, as well as a port for a printer or other device. The tablet portion itself even has a full-sized USB 3.0 port for connecting a device.

Surface 3 can even be connected to another monitor or HD display. And there is a microSD card reader built into the docking station.

Microsoft says the device will ship by May 5 and starts at $499. It’s currently available at the Microsoft Store for pre-order.