Charge Your Apple Watch, iPhone and More with the NuDock Lamp 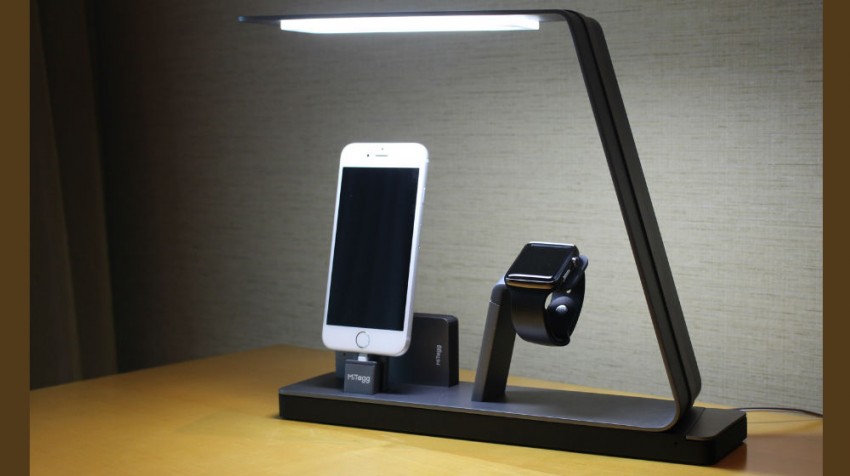 There has been a lot of buzz surrounding the new Apple Watch.

This anticipated wearable device has been in high demand and companies are already jumping on the Apple Watch bandwagon.

MiTagg is one such company that is looking to not only cash in on the Apple Watch hype but also solve a possible frustration Apple’s new product presents. Namely, that frustration is having yet another device to charge every day.

It’s true that it can be hard enough remembering to charge all the devices many of us carry on a daily basis. Those include phone, tablet, laptop, and now the wearables that are becoming more common. One solution is a central charging station, and that’s what MiTagg has created with their NuDock Power Station Lamp.

NuDock is a slim and useful charging lamp that is being touted for being able to not only dock your Apple Watch but also your iPhone, an external battery pack, and a USB-charged device. That’s up to four devices charging, at once, from the same station.

The company claims NuDock is designed to be minimal and clean. NuDock is touch sensitive so there are no buttons or switches to disrupt it’s anodized aluminum exterior. Tap on or off and control the brightness of the LED light with the swipe of a finger.

For more information on the NuDock charging lamp check out their Indiegogo video below:

NuDock comes with a portable 2,000-mAh battery that MiTagg has named NuKi. The company says it has built some handy features into NuKi. The battery is said to use Bluetooth to help you locate your phone if you can’t find it. On the flip side, you are supposed to be able to use your phone to find NuKi if you are at your wit’s end as to where you last left it.

It should be noted that the NuDock charging lamp does not come with built in chargers for the Apple Watch or iPhone. Instead you will have to install the chargers yourself. MiTagg claims installation is simple and NuDock is design to hide the cords to keep things clutter-free.

On the one hand, it’s a bit of a hassle to have to install your own charger. On the other hand, it means NuDock has more forward compatibility if Apple decides to change their cables in the future.

Another drawback is MiTagg’s statement that the NuDock charging lamp is only compatible with Apple’s Lightning Cable. So those still using an older iPhone that does not use a Lightning cable, or those who don’t use an iPhone at all, will be out of luck if they are interested in NuDock.

Even with these drawbacks there have been plenty of people buying into NuDock charging lamp. MiTagg is currently running an Indiegogo campaign to launch their product. The company has already surpassed its campaign goal and has raised more than $243,000. Early backers can pre-order their own NuDock for $129. The lamp will most likely retail for $249 later. Shipping is planned to start in July.